Giving gifts to the children of the world

Titular Businessman
Scott Calvin (Santa Claus) is the main protagonist from Disney's The Santa Clause movies. He was once a divorced father and business man of a toy company until one Christmas night, he disturbed the other Santa who fell off from his roof. When he put on Santa's suit, he has a new job as the new Santa Claus.

He was portrayed by Tim Allen, who also voiced Buzz Lightyear in the Toy Story films and was famous on TV's Home Improvement.

Originally, Scott Calvin was an advertising executive for a toy company. At the time of the first film, he is divorced from his ex-wife, Laura, with whom he had one son Charlie. He was initially cynical in regards to Christmas, but was willing to reassure his son about his belief. He eventually comes to realize the true meaning behind Santa after being forced to take on the role, and comes to accept his new life as Santa Claus. He may have done hallucinogenic drugs when he was younger, as during his first experience with Santa's Bag and going down the chimney, when Charlie remarked on his flying, Scott told him that he was used to flying as "he lived through the sixties".

As Santa, Scott is capable of certain feats of Christmas magic. He eventually remarries to a woman named Carol Newman, who becomes Mrs. Claus and fathers another son named "Buddy Calvin".

On Christmas Eve, Scott's son Charlie is spending the night with him before spending Christmas with his mother and stepfather. Despite a lack of belief in Santa, he tells the story The Night Before Christmas to Charlie, and reassures him about Santa. Later that night, Scott awakens to a sound on his roof. He and Charlie investigate, and discover Santa and his reindeer. Scott's shouting startles Santa into falling off the roof, presumably killing him. While looking for ID, Scott finds a business card explaining the reader to put on the suit if something should happen to him. Scott does so, and with Charlie, Scott is abruptly forced into Santa's job of delivering presents.

When they finish, Scott and Charlie are taken to the North Pole, where Scott meets the head elf, Bernard and learns that he has entered a form of contract, wherein he agrees to become the new Santa Clause upon putting on the suit. Scott is told he has until Thanksgiving to put his affairs in order, and awakens at his home the next morning. While Scott believes the adventure to be a dream, Charlie is ecstatic about his father's new role.

Over the upcoming months, Scott begins to take on Santa's appearance and habits, such as putting on weight and having white hair and growing a white beard, and craving cookies and milk and wearing red and green clothing. Eventually, Laura and her psychologist husband, Neil, become worried that Scott's behavior is encouraging Charlie's "delusions" as the boy continues to insist that Scott is Santa. Eventually, Scott's visitation rights are suspended. After seeing Charlie at Thanksgiving, Scott is encouraged by Charlie to accept his new role, and both are taken to the North Pole by Bernard.

Meanwhile, the Millers fear Scott kidnapped Charlie, resulting in a wide search on Christmas Eve. Scott is arrested while delivering presents, and is placed in jail. Luckily, he is able to escape thanks to a rescue by Charlie and a special team of elves. Charlie and Scott return to Charlie's house, where his parents finally accept that Scott is Santa. Scott leaves Laura and her husband the presents they had not received as children and takes off in plain sight of the public. After being summoned by a magic snow globe given to Charlie, Laura allows Charlie to ride with his father to deliver presents.

Scott has been working as Santa for 8 years now, and is happy and settled in the North Pole. Everything seems perfect until he is approached by elves Bernard and Curtis who have discovered another clause - The Mrs. Clause.

Only married men can be Santa Claus, and Scott must marry before the next Christmas Eve or he will no longer be Santa. The de-Santafication process begins taking place, with Scott losing weight, his beard shortening, and running out of magic as he runs out of time to find his Mrs. Claus. As Scott sets out to find love, Curtis finds a way to disguise Santa's absence to North Pole residents by making a plastic clone of Santa.

Meanwhile, Scott's son, Charlie, has been getting into trouble at school, and Scott is called in to meet with Principal Carol Newman to discuss Charlie's behaviour. An attraction develops between Scott and Carol as he uses the last of his magic to romance her - surprising her with snow, a carriage, and childhood Christmas wishes come true.

Scott is visited by Curtis who informs him that the toy clone Santa has turned evil and his dictatorship is threatening to destroy Christmas. Scott returns to the North Pole to save the day and marries Carol soon after and transforms back into Santa.

When Jack Frost finally gets fed up with all the attention and love that Santa Claus is getting, he tricks Scott into giving up his job as Santa. Jack goes back in time and becomes Santa Claus himself, turning the North Pole into a theme park. Scott and Jack were the only ones who remembered that Scott used to be Santa. Scott manages to trick jack into giving up being Santa and regains the title. He then turns jack back to normal and becomes a father to a new son. 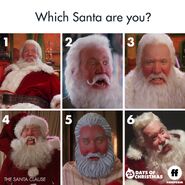