Spot Pilgrim (by the Katayanagi Twins)

Bass Guitarist for Sex Bob-Omb
Employee at The Happy Avocado

Be with Ramona
Defeat the Seven Evil Exes

Scott William Pilgrim (born September 27th) is the titular main protagonist of the book series of the same name and it's film adaption, Scott Pilgrim Vs. The World. He is a 23 year old (24 in Volume 5 & 6) slacker living with his gay roommate, Wallace Wells in the mysterious land of Toronto, Canada. He is the bassist for the indie rock band, Sex Bob-omb alongside his friend Stephen Stills and Kim Pines.

He falls in love with mysterious rollerblader Ramona Flowers, but has to defeat her seven evil exes in order to date her, led by her most recent ex-boyfriend and his archenemy, Gideon Graves.

He was created by Bryan Lee O'Malley, and was named after the Plumtree song, "Scott Pilgrim". Many of his hobbies include playing video games and music, all which O'Malley liked as well.

In the 2010 film, he was portrayed by Michael Cera who also portrayed Robin in The Lego Batman Movie, Barry in Sausage Party and Brother Bear in The Berenstain Bears.

Scott Pilgrim has fallen in love with the newcomer, American ninja delivery girl, Ramona Flowers. But in order to win her affections and the right to date Ramona he must defeat her seven evil exes, a.k.a the League of Evil Ex-Boyfriends.

Scott's family moved to Ontario, where he got into a fight on his first day at St. Joel's Catholic High School. While sitting outside the principal's office, he meets Lisa Miller, who becomes friends after constantly bothering him. Scott also meets Kim Pine here, and they become friends too. Lisa starts a band with Scott, but then he points out that there are only two of them, and they need a drummer, so when Scott sees Kim playing drums at a school event, he begs her to join their band.

This was actually later revealed to be a false memory implanted into Scott's mind by Gideon Graves. Scott's family later moved to Toronto, Canada, leaving Lisa behind.

Scott went to the University of Toronto, where he met his friends, Stephen Stills and his soon-to-be gay roommate, Wallace Wells. While there, Stephen dated Julie Powers, and Scott dated her nerdy roommate Natalie Adams. After forming a band with Scott and Stephen, Natalie began to change. She threw out her nerdy stuff in favor of "CDs and boots" and asked everyone to call her "Envy". She then took control of their band, adding in three extra members. Then on New Year's one year, Scott and Envy had a fight and broke up, this made Scott extremely sad.

During the next years, Scott finished up college and formed Sex Bob-omb with Stephen Stills and Kim, who moved to Toronto. Some time soon after that, he met Knives Chau, a 17-year-old who he started dating after they met on a bus. Despite the fact that Scott explained he liked their relationship, he still felt lonely. He had a dream about a girl on roller skates one night, and he then became distracted when on dates with Knives. He then saw her at the library, and again at a party, where he just embarrassed himself and promised to never talk to her again.

At the party, he learned her name was Ramona Flowers, and that she was a delivery girl for Amazon. He then orders CDs and waits at the door for the weekend. When she comes, he asks her out and she says yes, to make up for the fact that she used the Subspace Highway to deliver packages quickly, explaining why she was in his dream. The two are caught in a snow storm while on a date and have to go back to Ramona's apartment. He spend the night and invited Ramona to Sex Bob-omb's concert the next day, forgetting he'd also invited Knives too.

Whilst there, a mysterious man bursts through the club ceiling and fights Scott, claiming to be one of Ramona's evil ex-boyfriends, going by the name Matthew Patel. After defeating him, (explained below) Scott and Ramona ride the train back home, and she explains that in order to date her, Scott will have to fight her seven evil ex-boyfriends, also known as the League of Evil Exes.

Scott is a silly, goofy, naive, but optimistic man. 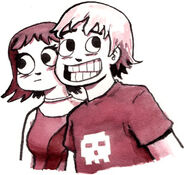