Scourge is the leader of Jungle Planet and former antagonist-turned-hero from Transformers: Cybertron. While he began with noble intentions, Scourge was corrupted by power when the took over Animatron. Over time, his inner nobility eventually asserted itself after he learned the true nature of power.

Scourge, along with his old friend Snarl was once one of the greatest students of Backstop. and was trained in the way of the peaceful warrior. After the raiders who had brought chaos to Animatron had returned, Scourge decided to take the fight to them. Backstop urged him not to continue the cycle of violence, but Scourge felt he had no other choice, and began the wars. While he did defeat the raiders, Scourge had been corrupted by the fighting, and became a tyrant.

Scourge would encounter the Decepticons and the Autobots when they searched for his world's Cyber Planet Key. He was swayed to the Decepticon's side, and found rivals in the form of Leobreaker and Optimus Prime. However, even at this point, his inner nobility was seen, when he let Leobreaker live, showing a respect for his rivals. He also voiced an admiration for the Autobots human friend Lori Jiménez, calling her "little sister".

Having learned important lessons on the nature of power, Scourge thanked Optimus Prime for everything he had been taught, and departed with Snarl to save his home from the Unicron Singularity.

However, they were unable to stop the black hole dragging Jungle Planet through the space bridge to the Singularity. As his people were evacuated,Scourge intended to die with his homeworld, forcing Snarl to beat some sense into him. Accused of cowardice and giving up on his people, Scourge at last realised the lesson Backstop tried to teach him so long ago, and told his followers to never give up hope and always go down fighting. As his old teacher looked at him with pride, Scourge found himself bathed in the light of Primus as his temple rose from the ground and revealed itself as the fourth of the starships, called Hyperborea. Aboard the mighty vessel, he arrived at Primus in time to scare off Galvatron's minions and witness the creation of the Ark, a symbol of the united Transformer race.

When Galvatron retreated to the very core of the black hole, Scourge and the other planet leaders approached Optimus Prime, wishing to aid him in defeating Galvatron. After discovering Galvatron planned to destroy reality without even sparing his minions, Scourge voiced his disgust at Galvatron's evil. The combined Autobots managed to defeat him, with Scourge contributing his flames to their final attack. The spiteful Galvatron threw the Lock and keys into the black hole, and Scourge was forced to break off and grab his homeworld's Cyber Planet Key. He beheld Primus' destroying the black hole and then watched the deity reform into Cybertron, now with elements of the Jungle Planet on its surface.

Unfortunately, Jungle Planet itself was still out of place, hovering just above Cybertron. The Autobots worked together to build massive thrusters to push the planet back to its rightful place, and Scourge made sure to thank Optimus once more for all he had done. The plan proceeded without a hitch until the vengeful Galvatron damaged one of the engines, changing the planet's trajectory towards Cybertron. When the damaged thruster began falling over, Scourge was the first Transformer to leap up and try to physically push it back into place. With the combined aid of Transformers from all over the galaxy, he succeeded, allowing his planet and his people to return home.

With his home restored, Scourge joined the other planet leaders in an "intergalactic peace conference", where it was decided that a new space bridge project would be made. In preparation for the project, Scourge held a boxing match on Jungle Planet to determine its new leader, and won. As a result, he sent Leobreaker as the Jungle Planet representative. Scourge would poorly attempt to hide his tears at Leobreaker's departure.

In a montage during the credits, Scourge was seen lifting a large boulder. 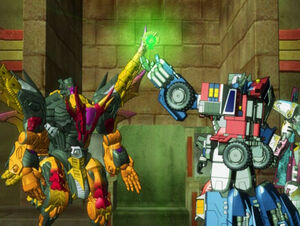 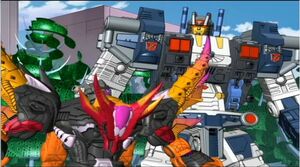 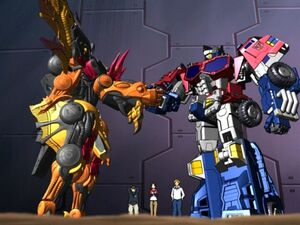 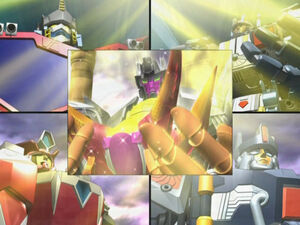 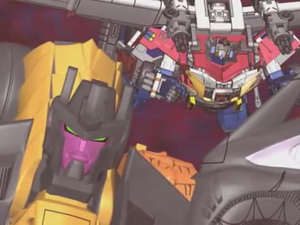 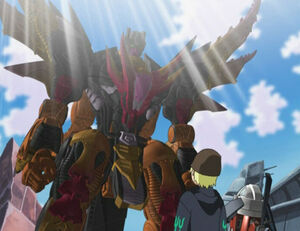 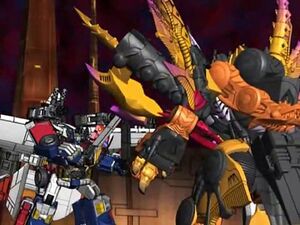 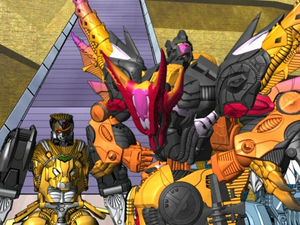