Spending time with Donald and his grandnephews.

Remain the richest duck in the world.

Scrooge McDuck, also known as Uncle Scrooge, is a duck of Scottish origin, who is prominent as the richest duck in the world. He is also well known as the most thrifty person in the world, going to extreme lengths to save even the most insignificant amount of money. Arguably appeared for first time in The Spirit of '43 as a character that recommends tips to Donald Duck, although Scrooge not was named in the film. He was formerly voiced by the late Alan Young in all his animated appearances and is currently voiced by David Tennant (who also played the Tenth Doctor and Angus) in the 2017 reboot of Ducktales.

He is the main protagonist of the TV series DuckTales and its feature-length theatrical film, DuckTales The Movie: Treasure of the Lost Lamp.

According to comic book artist, Don Rosa, Scrooge was born in 1867 to Fergus McDuck and Downy O'Drake-McDuck in Scotland. He has four siblings who include two sisters named Matilda and Hortense McDuck and two half brothers named Gideon McDuck and Rumpus McFowl.

For his tenth birthday, his father made him a shoe shining kit so he could learn more about business and to make some money. To show him his first lesson, he gave a man named "Burt the Ditch Digger" an american dime to give to Scrooge after he would shine his shoes, so it would show scrooge that people will cheat him. After scrooge shined Burt's shoes and received the dime, he realized it was american, and learned the lesson his father wanted him to learn. That was his Number One Dime.

After shoe shining for three years, he took a job on a cattle boat headed towards New Orleans. He then went up to Louisville, where he met his Uncle, Angus McDuck. While helping recover a sunken ship with his Uncle, Scrooge had his first encounter with The Beagle Boys. He later bought Angus's boat, but made no money because railroads were taking business away from steam ships.

Other characters associated with Scrooge

Here is a list of Other Characters that are associated with Scrooge.

Donald Duck- Scrooge's Nephew who is a hot tempered wise quacking duck that complains about everything but despite that Scrooge lets him work for him because he can't trust anyone else.

Huey, Dewey and Louie - Scrooge's Grandnephews and Donald's Nephews who are wise beyond their years thanks to their Junior Woodchucks Guidebook and Junior Woodchucks expertise. They often go along with their uncles on adventures.

Gyro Gearloose - An Inventor who happens to be friends of Scrooge and his nephews. He invents all sorts of inventions for them but they don't always work the way he wants them to.

Daisy Duck - Donald's Girlfriend. She sometimes goes along with Donald, Scrooge, and the nephews. She's a member of the woman's club, writes diaries and sometimes dates Donald's cousin Gladstone.

Miss Emily Quackfaster - Scrooge's Secretary. Not much is known about her.

Grandma Duck - Donald's Grandmother on his father's side of the family. She runs a farm outside Duckburg.

Gladstone Gander- Donald's Cousin who is also a competitor for Daisy's affections. Gladstone is extremely lucky.

Minnie Mouse - Mickey's girlfriend, is occasionally shown as being a very close friend to Scrooge

Fenton Crackshell/Gizmoduck - As Fenton, he's Scrooge's overexcitable and clumsy accountant. But as Gizmoduck, Scrooge's bodyguard and superhero of Duckburg.

The Beagle Boys - A gang of Crooks who try to rob Scrooge.

Appearances outside of Ducktales

He eventually gained a toe hold in the Disney Duck Universe when he made his second appearance in Donald Duck Four Color #189 in The Old Castle's Secret.

Scrooge continued to appear as Donald's supporting character up until 1952 when he got his own comic book. The first story where his name was used in the title was Only A Poor Man which was printed in Uncle Scrooge Four Color #386. During this time Scrooge was a popular Disney Character as far as comic books go. He was created by Carl Barks and used by him and other different artists such as Don Rosa, William Van Horn, Romano Scarpa, Marco Rota, Daniel Branca, Daan Jippes, Fred Milton, and many other different artists. The best source for Scrooge's life story is The Life and Times of Scrooge McDuck by Don Rosa. It covers every detail from when Scrooge earned his first dime to when he first met his nephews.

Despite being popular in the comic books Scrooge made very few appearances in Animation. Here is a list of the few animated cartoons he appeared in:

In Ducktales, Donald, who is off to the navy, leaves his three cousins Huey, Dewey and Louie with Scrooge so he can babysit them. In the very first episode, the three cousins cause trouble, causing Scrooge to get mad at the trio. When they hear him talk about how annoying they are, they leave, missing that Scrooge revealed that he was quite a troublemaker himself as a child. After stopping The Beagle Boys, Scrooge, Huey, Dewey and Louie warm up to eachother and go on many treasure hunting adventures together. From that point on, Scrooge is very caring of his nephews and feels sorry whenever they are in danger.

In the video game DuckTales: Remastered, which is a remake of the NES DuckTales, Scrooge rescues his nephews from the Beagle Boys and, much like the cartoon, goes off to hunt treasures Unlike the cartoon, however, his nephews and Webby stay as background characters while he does the exploring himself. At the end of the game, however, Magica De Spell has captured his nephews and he is willing to sacrifice his newly gained treasures and even his real Number One Dime to save them, showing how kind Scrooge can be. 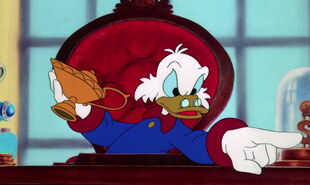 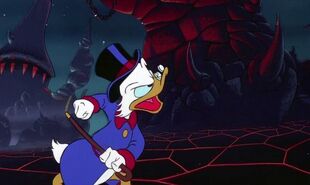 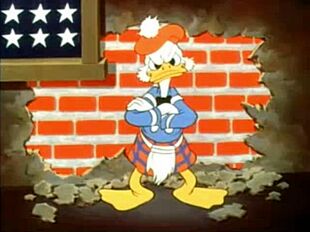 Scrooge McDuck in The Spirit '43 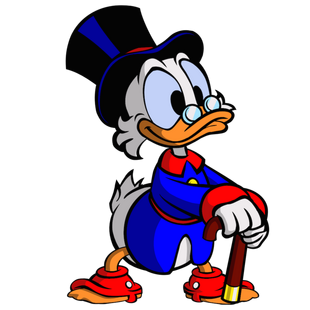 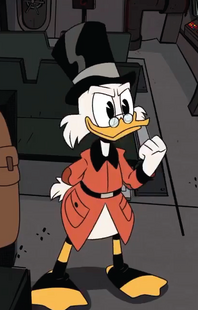 Retrieved from "https://hero.fandom.com/wiki/Scrooge_McDuck?oldid=1172431"
Community content is available under CC-BY-SA unless otherwise noted.