Scylla, also dubbed Titanus Scylla, is a minor character in the 2019 film, Godzilla: King of the Monsters. She is a giant armored cephalopod kaiju who appears as a minor Titan that obeys Ghidorah, later Godzilla.

Scylla was awakened from her slumber in Arizona by King Ghidorah's call, which also awakened many other Titans around the world. Scylla's legs tore through the desert near an oilfield as she erupted from underground. Like the other Titans, Scylla rampaged through populated areas, destroying buildings in nearby Flagstaff with her colossal legs. Eventually, she made her way to Boston along with Methuselah, Behemoth, and the six-legged MUTO. There, they found the alpha they were following, Ghidorah, slain at the hands of Godzilla. Rodan approached Godzilla to challenge him, but was intimidated by his gaze and ultimately submitted. The other Titans all followed suit, each "bowing" in their own way to the new King of the Monsters. Later on, reports of Scylla leaving humanity to live in a lake were brought up. The creature is also credited to the slowing down of the polar ice caps melting.

Godzilla Dominion and Godzilla vs. Kong

As show in the prequel comic, Scylla once attempted to attack a ship carrying a nuclear weapon before Godzilla fends her off. Alarmed by energy signature emitted by Ghidorah's remains that desecrated by Apex Cybernetics, Godzilla sends her and other Titans back into dormancy. She remains dormant as her alpha instructed throughout the events of Godzilla vs. Kong, leading Monarch to label her status as "Defeated" due to unaware with the reason of her inactivity.

Scylla is a gigantic aquatic creature with a squid-like body and six incredibly long spider-like legs which she uses to walk. Scylla's torso possesses a noticeable ridge and a raised spine, with a large curved extension above her head, in a similar manner to the shell of a Chambered nautilus. She possesses a rounded head with two eyes, and several tentacles which hang down from her mouth area, similar to Cthulhu.

Godzilla and Scylla seem to have a respectful relationship. In 2019, Scylla does not attack Godzilla, but instead bows to him to show how she respects and acknowledge him as the rightful alpha Titan. 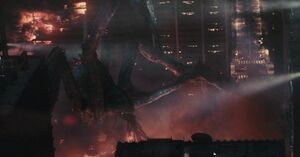 Scylla and the Titans surrounding Godzilla.

Scylla and the bowing to Godzilla.