Scyther is a mantis Pokémon that first appeared in the first generation of Pokémon. Despite being a Bug/Flying type of Pokémon, Scyther resembles more of the dinosaurs and Dragons mixed with certain ninjas. They have 2 sharp teeth shown out front, 2 swords for appendages, they fly (minusing most Pokémon games of course), having less insect features and they are one of the most notable Pokémon to learn and use Double Team on their own.

The most famed Scyther of all in the anime, is Tracey's Scyther, who was an aging Scyther that was defeated by a younger Scyther and banished from the swarm. It's still a strong fighter, but tires out quickly, it once had a rivalry with Ash's Charizard, but the 2 became good friends but still have a strong rivalry every now and then and unlike most Scyther, Tracey's Scyther doesn't show it's 2 front sharp teeth. 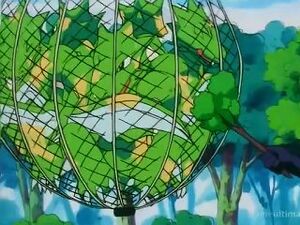 A swarm of Scyther trapped in the net.