To get to Puerto Lobos (succeded or failed; determinant)

Protective Sibling
Sean Eduardo Diaz is the main protagonist of the 2018 episodic video game Life is Strange 2 and a minor character in The Awesome Adventures of Captain Spirit.

After a tragic incident results in the death of his father, Esteban Diaz, and the police officer who took his life, Sean is forced to run away from his home in Seattle with his younger brother, Daniel Diaz. In fear of the police, he intends to reach their father's hometown of Puerto Lobos, Mexico, all while attempting to conceal the emergence of Daniel's mysterious supernatural power.

He is voiced by Gonzalo Martin.

During "Roads", Sean has short, cropped dark brown hair and wears a maroon beanie with a yellow logo on its rim (while walking home from school). He wears a grayish-blue zipper pocket hoodie with a "WOLF SQUAD" logo over a white T-shirt, coupling this with grey khakis and a reddish-brown belt with its strap hanging out from underneath his hoodie. On his feet, he wears grey running shoes with blue laces and green markings.

By "Rules", and during The Awesome Adventures of Captain Spirit, Sean's hair has noticeably grown - his formerly short bangs now reaching his mid-forehead. While in the Willamette National Forest, he wears a brown fleece-lined denim jacket over his hoodie. During Captain Spirit, he wears a light orange quarter-zip pullover over a tan zip-up hoodie. His khakis have begun to develop holes at the mid-thighs and kneecaps, and he now wears sturdy brown hiking boots. After spending some time at his grandparents' house, there is a blue patch sewed onto his pants.

During the opening flashback in "Wastelands", Sean wears a grey t-shirt with a logo reading "NYC-UK" alongside orange boxers and white socks. In the present day, Sean's hair has grown further, his bangs now almost touching his eyebrows; optionally, Sean can have his hair cut by Finn, resulting in a mohawk. He still wears his "WOLF SQUAD" hoodie, which shows several signs of wear; multiple holes have developed in the fabric, the logo has several cracks, and the collar has been ripped and stitched back together. A patch depicting what appears to be the Sigil of Baphomet is sewn onto his right shoulder. His grey khakis now have more patches, including one that reads "SPACE FUCKUPS" on his back pocket and another depicting a skull embedded with knives. While in his tent, Sean wears a grey graphic t-shirt, green boxers depicting tadpoles and a frog alongside the word "HI!", and dirty white socks. Optionally, Sean can get a tattoo of a wolf or three marijuana plants done on his right arm by Cassidy.

During "Faith", Sean's hair has been shaved to a buzzcut, as well as having a bandage over his damaged eye that left him half-blind. During his time in Sacred Hope Hospital, Sean wears green hospital garbs and white socks. When he escapes the hospital, Sean wears his recovered clothes. While walking to Havens' Point, Sean has his hoodie in his backpack to show his grey graphic t-shirt, as well as being partly sunburnt. After being picked up by Karen and having a shower, Sean wears his khakis with a clean white t-shirt and red boxers with blue whales on them. While infiltrating the church, Sean puts his hoodie back on, as well as wearing a black eyepatch provided by his mother. He also wears a multicolored bracelet on his right wrist.

During "Wolves", Sean's hair has grown back to a stage that is slightly shorter than in the episode "Rules", but still longer than in the episode "Roads". He briefly does not wear his signature hoodie in favor of a dark grey and brownish baseball T-shirt and sports a grey bandana with light brown detailing hanging loosely around his neck to mid-torso area, but still retains his patched up grey khakis and hiking boots.

Sean has the option of decorating his backpack with souvenirs he finds along his journey. Throughout most of "Roads", Sean wears a grey school bag which is adorned with patches displaying a mosquito, the word "NSFW" appearing as if on fire, and a smiling doodle. At the beach, Brody Holloway gives Sean a faded green-and-red hiking backpack which features an "ULTRA-D" logo, the phrase "All who wander are not lost", and several hobo signs are written in black marker.

Sean is described as "creative, sensitive and protective" in official marketing material.[1]

Sean's creative side is shown by making drawings in a sketchbook his father had purchased, who seems to have encouraged Sean to draw.

His protective side is shown when Daniel is getting harassed by their neighbor, Brett Foster, for spilling zombie blood on his shirt. Sean can defend his little brother and attacks their neighbor for cruelly insulting them. After he runs away from home with Daniel, he becomes more protective of him on their journey to Puerto Lobos.

Sean and Daniel are seen briefly in the ending of the game, standing on the other side of the fence. The brothers wave hello to Chris Eriksen after he gets up from the ground. 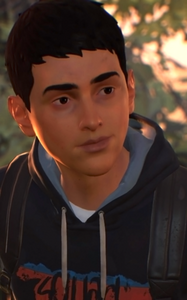 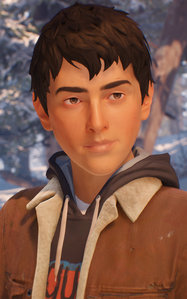 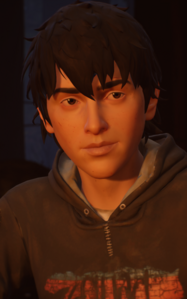 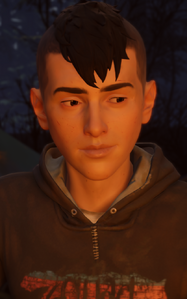 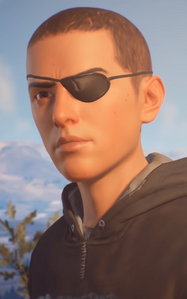 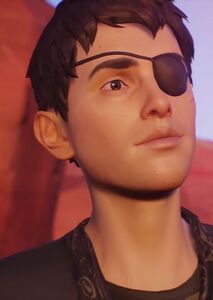 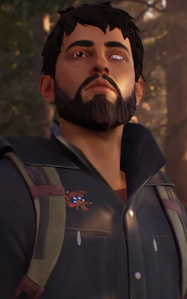 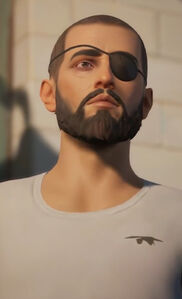 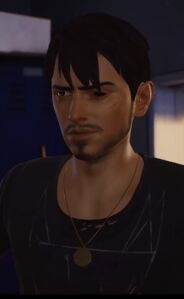 Add a photo to this gallery
Retrieved from "https://hero.fandom.com/wiki/Sean_Diaz?oldid=2004078"
Community content is available under CC-BY-SA unless otherwise noted.