Segata Sanshiro is the mascot for the Sega Saturn in Japan and a fictional character created by Sega to advertise the Saturn between 1997 to 1998. He is a parody version of a legendary judo martial artist known as Sugata Sanshiro from an Akira Kurosawa film of the same title and portrayed by Hiroshi Fujioka, best known for playing Takeshi Hongo from Kamen Rider.

He is a playable Solo character in the crossover turn-based role-playing video game, Project X Zone 2.

In many Sega Saturn commercials, Segata Sanshiro is a legendary man with curly black hair and bare feet. Being a martial artist, he usually wears a white karate gi with sleeves and a black martial arts belt.

Segata Sanshiro is described to be an absolutely merciless, hotheaded person. Despite being helpful for Sega and their 5th generation video game console, he is brutal in his unbelievable methods and cares only a little in his ways to affect other people. Even though he should eventually stop doing so, he has stated that he will hurt innocent kids to achieve his goals and kills when necessary as his villainous traits. As he willingly became a hero, he is able to either save others and help them out of the good in his heart or feel his heroic traits to advertise the Sega Saturn console better in commercials he appeared in. 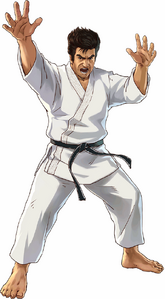 Retrieved from "https://hero.fandom.com/wiki/Segata_Sanshiro?oldid=1744308"
Community content is available under CC-BY-SA unless otherwise noted.