Seija Kijin (鬼人 正邪 Kijin Seija) is the main protagonist of Impossible Spell Card and the minigame Gold Rush. She's an amanojaku with the power to turn over anything. She resides in the Shining Needle Castle.

Seija made her debut as the fifth stage boss of Double Dealing Character, and was behind the main plot of the game. Her main objective was to overthrow society, and to make the weak rule over the strong. She then appeared as the main protagonist in Impossible Spell Card. 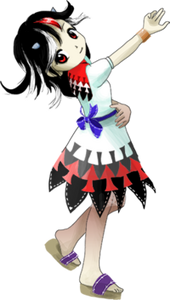 Add a photo to this gallery
Retrieved from "https://hero.fandom.com/wiki/Seija_Kijin?oldid=1913540"
Community content is available under CC-BY-SA unless otherwise noted.