To restore hope to the world (partially succeeded)

Seiko Kimura is a character featured in Danganronpa 3: The End of Hope's Peak Academy and a participant in the Final Killing Game.

Seiko is a member of the Future Foundation and is the leader of the 4th Division. Her responsibility is to aid in the development of new medicine and medical treatments.

During her time at Hope's Peak Academy's Class 76th, her title was Super High School Level Pharmacist (超高校級の「薬剤師」chō kōkō kyū no “yakuzaishi”) until she was expelled after she unwillingly got involved in a bombing incident.

Seiko is the third victim of the brainwashing video and forced to commit suicide in the Final Killing Game, becoming the fifth victim overall.

Seiko is an adult in her early twenties, around 23 at youngest (about 18 in Danganronpa 3 - Side: Despair).

She is a short person with purple eyes and a sickly complexion. She has pale grey hair and a respirator mask covering her mouth. She wears a dark-colored jacket with the Future Foundation ID pinned to the lapel, a white dress shirt, a dark miniskirt held by a purple belt, long black stockings, and purple Mary Janes. Under her respirator mask, she wears braces. She also wears purple gloves with a single white stripe in the middle. Her eyes give her a frightening look.

After consuming some of her drugs, her appearance changes drastically in a very short amount of time. Her eyes turn a darker shade of purple with symbols resembling flames. Her body tenses, hair becomes very long, and her nails and teeth become long and sharp. In this form, she appears much stronger, as well as faster and she runs on all fours.

During her high school years, she wore the uniform of Hope's Peak Academy with a purple vest and a brown belt. She wore the same stockings, gloves and mask.

Seiko has a reserved personality and stilted way of speaking. As a pharmacist, she has an extensive knowledge of medicine and drugs. She’s created many different kinds of drugs, including ones that drastically change one's physical appearance and make them much faster and stronger.

Much like Kyoko Kirigiri, she is conscious of how easy it is for people to guess what she is thinking through her facial expressions, so she hides her face behind a mask. She gets startled easily and appears quite anxious. During her time in high school, she was shown to be quite shy too. She is very meticulous while dealing with medicine.

Seiko is shown to be one of the most compassionate members of Future Foundation, as she shows remorse over both Chisa Yukizome and Daisaku Bandai's deaths, and becomes angry with herself for not being able to save them. During her high school years, Seiko was described as soft-hearted, and she often took requests from other students such as Teruteru Hanamura, Nagito Komaeda, and Ruruka Ando. She also loves animals, providing care for an injured animal at no charge, as well as producing a number of medicines specially formulated for use on animals.

Because of her soft nature, Seiko (similar to Mikan Tsumiki) is very loyal and forgiving to people who are friendly or helpful towards her. Because she is unable to eat Ruruka's sweets due to her medicine, she feels guilty and try to compensate by helping her whenever she needed it. When Ruruka attempted to get her to kill Kyosuke Munakata, Seiko refused (and ultimately attacked Ruruka out of anger) due to the fact that Kyosuke had helped her after she had been expelled from Hope's Peak Academy.

Seiko in DR3 Side: Despair 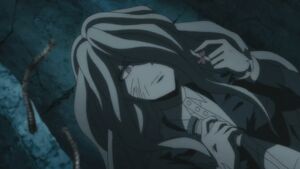