Princess of the Vapra Clan (formerly)

To be the best All-Maudra. (succeeded)

To end the Skeksis' rule over Thra once and for all.

Seladon is a major antagonist-turned-one of the tritagonists of The Dark Crystal: Age of Resistance. She is the eldest princess of the Vapra Clan, the first-born daughter and heir of All-Maudra Mayrin, and the oldest sister of Tavra and Brea.

She is performed by Helena Smee, with Gugu Mbatha-Raw providing her voice.

Seladon has long platinum blonde hair (pink; depending on the lighting) with straight bangs, two low braids on both sides in the front, and worn loose with three braids on each side of the head held back by a white ribbon, fair skin, and almond-shaped green eyes. She wears an elegant long-sleeved silver blue dress and a silver circlet on her head to symbolize her status as the eldest princess of the Vapra Clan.

According to Aughra, Seladon is a lost child, letting her emotions cloud her better judgments. This is proven true when in her anger with her youngest sister Brea, she had her taken away as a traitor. To Tavra, Brea and Seladon were both similar, especially having the same stubbornness. She was also one to follow traditions, and always berated Brea whenever she spoke out against the tithing ceremony.

In truth, Seladon felt overshadowed by her mother because Brea was able to get away from royal duties. However, in reality, Seladon felt pressured because she was going to be All-Maudra one day and why Mayrin was the toughest on her. Seladon admits that she finds her duties and the meetings she has to attend to be utterly boring.

She was very loyal to the Skeksis, believing them to be benevolent rulers but when the evidence was right in front of her that they were evil, Seladon was oblivious to their true nature, proving her to be a horrible judge of character.

When she learned that they were evil as everyone had warned Seladon, she refused to take responsibility for her actions, immediately blaming Brea and her friends causing all the trouble. However, when Tavra was mortally wounded and on her death bed, Seladon realized the mistakes she made and acknowledged her faults, even saying it should have been her who got killed instead and that her arrogance was not her younger sister's price to pay. Before her death, Tavra was about to make Seladon and Brea reconcile after their sibling rivalry.

In the end, Seladon found a new sense of loyalty with Brea, Rian and Deet, joining them in their fight during the Battle of Stone-in-the-wood. She proceeded to be brave in battle, even helping Maudra Fara when she was mortally wounded. It was there that Fara acknowledged Seladon as the All-Maudra and that her mother would have been very proud of her. She watched in shock and horror as Deet channeled the Darkening and used it to protect her friends and family, shouting in terror to the Skeksis.

A happier Seladon is seen at the celebration, giving Gurjin a hug after their first victory at Stone-in-the-wood.

Seladon has a sibling rivalry with her youngest sister, Brea, due to their mother favoring her youngest sister. When Brea receives a ride from the Skeksis to the palace for the Tithing Ceremony, Seladon berates Brea and gloats that she is now going to be punished by their mother and sent ot the Order of Lesser Services. However, Brea took note that her sister was jealous because Seladon was not the one who got to sit in the carriage of the Lords SkekOk and SkekLach. During the Tithing Ceremony, Brea begins questioning the whole event when SkekOk and SkekLach both manipulate a farmer and his wife to give up a pendant that belonged to the mother of the farmer's wife. Brea attempts to voice against it, but Seladon tells her sister that they cannot pay for the farmers' offerings as it is not their job.

Later, when Brea erases the Sifan Elder, Cadia's, memory, Seladon is the one who convinces her mother to send Brea to the Order of Lesser Services as punishment. Later, she voices her concerns of becoming the All-Maudra to Tavra, and reasons that Brea deserves time with the Order to learn discipline. However, Tavra remains silent through the whole conversation. Seladon asked why she didn't say anything, and her younger sister responds that their mother puts pressure on Seladon because she will be All-Maudra one day. Seladon doubts her mother will ever see her for what she is, but Tavra assures her sister that she will one day. As Seladon admits that she finds the meetings she attends so boring, the sisters are informed that there has been a murder at the Crystal Castle.

Sometime after Brea escapes from the Order and reawakens a creature, Lore, Seladon comes in with several guards and yells for her sister to get away from the creature. However, Brea stops Lore from attacking Seladon because she is her sister. Looking upon the stone creature, Seladon asks Brea what she has done. As Seladon berates her younger sister, Mayrin approaches the arguing sisters and yells for them to stop. Seladon and Brea each convince their mother to take their side. However, Seladon is unsuccessful, as Mayrin is convinced by Brea and sends Seladon to check out the farms on the outer regions to learn more about the Blight (the Darkening). Before she heads out, Seladon meets Deet and agrees to listen to her and Hup's story. Seladon doubts most of Deet's story, but willingly agrees to dreamfast with her. However, Seladon wakes up in the Dream Space and refuses to listen to Thra's call like her sister and mother are. Aughra sees her mind is set on a different path, so she sends her back. Seladon wakes from the Dream Space and goes to tell the Skeksis of the "traitors" that are in Ha'rar. However, it ends in tragedy when Seladon's mother is murdered by SkekVar. Blinded by anger, Seladon orders Brea, Deet, and Hup to be arrested with the rest of the Gelflings that SkekZok and SkekVar are taking back to the castle but not before making Seladon the new All-Maudra. 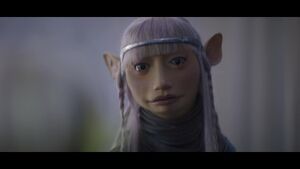 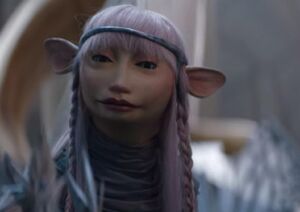 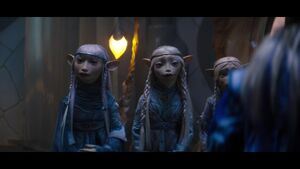 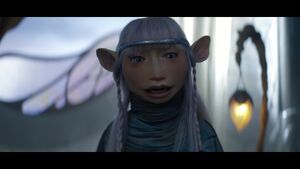 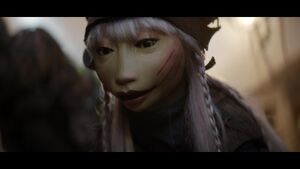 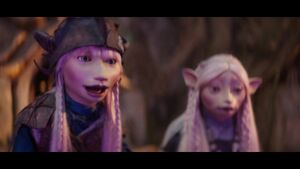