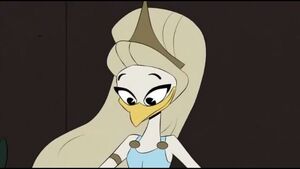 Selene is one of the characters in the 2017 reboot of DuckTales series. She is the sister of Storkules and a friend of Della.

She is voiced by Nia Vardalos

Selene is a beautiful, bubbly and fun-loving goddess who loves to have fun with her friends especially Della Duck. While she is playful and mischievous, Selene is also very kind and supportive, as seen when she encouraged Dewey not to give up on his mother.

In The Spear of Selene!, Dewey and Webby try to search for The Spear of Selene and uncover the mystery of Della's disappearance. However, Dewey struggles with the possibility that his mother may not have been a good person. They later find out that The Spear of Selene does not belong to Selene, goddess of the Moon, who reveals that Della was a great person and friend.

In Treasure of the Found Lamp!, Scrooge, Webby, and Faris D'jinn visit Ithaquack for phony quest at Ithaquack while the boys look for the lamp. Both of their adventures eventually lead them to the junkyard and into a mad dash to reclaim said lamp from the Beagle Boys before sunrise.

In Moonvasion!, When the Moonlanders invade, Selene is forbidden by Zeus to help fight the Moonlanders, though she's able to apologize to Della for not being of any help to her at this time. After tying up Zeus off-screen, Selene later appears to inform Lunaris that he has become Earth's new moon after his plan was foiled and her brother Storkules put the Earth back in its proper orbit.