Selenia is the daughter of Emporer Sifrat, the older sister of Betameche, the betrothed of Arthur, Princess of the Minimoys and the deuteragonist of the 2006 film Arthur and the Invisibles and it's two sequels Arthur and the Revenge of Maltazard and Arthur 3: The War of the Two Worlds (in the UK, the second and third films were merged into one film and released as Arthur and the Great Adventure).

She is 1000 years old in the years measured by the blooming of the selenia flower. She has a younger brother Prince Betameche. She has a determined character, strong willed In the pre-edited version, the love story between Selenia and Arthur has much more to it, involving the tradition of the first kiss exchange meaning that the two that kissed are wed. Selenia kisses Arthur and thus, they are wed, a following tradition is mentioned saying that now they must wait 1000 years before kissing again, because "Desire and faith has to be put to the test" "That which is rare is always valued highly." (as quoted from Selenia in the deleted scene of Arthur and the Invisibles) Princess Selenia is around 1,080 years old (in Minimoy Years) in the 2nd and 3rd movies of the Arthur trilogy. In the 1st movie she is 999. After getting to know Arthur, she falls in love with him. Arthur had begun to fall for her earlier, upon seeing a sketch of her in his grandfather's journal.

She is voice by Madonna in the first film and Selena Gomez (who also portrayed Alex Russo and Mavis Dracula) in the sequels. 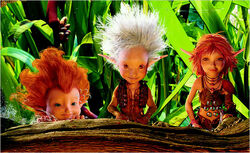 Selenia with Arthur and Betameche