Seliph is a character starring in Fire Emblem: Genealogy of the Holy War.

Seliph is the main hero of the latter part, and son of Sigurd and Deirdre. 17–18 years of age at the start of part 2. Because he also has an attached pedigree of MMA, he possesses Granvelle royal throne rights.

After the death of his father, including comrades Levin father at Yzak, Seliph is raised by Oifey and Shanan before being released to the order as a child. He was hiding in Tirunanogu Castle however, because it was discovered during the absence of Oifey and Shanan, and exits by himself. After Ganesha Castle's elimination, he got a mutually attracted encounter with Julia, while met under the guidance of Levin, he will know that he and she are siblings.

When advanced to a Knight Lord, it is possible to switch to cavalry using the "get down" command.

in Super Smash Bros. Ultimate. Seliph appears as a advanced primary attack-type spirit in world of light who increase the sword attack, his spirit battle is against Marth and Ike representing his father in the Castle Siege stage

Seliph is a shy yet strong-willed boy with great swordfighting abilities and a gentle heart. Due to this trait, he becomes the hope of hundreds of people who see him as the one who can end the tyranny of Grannvale.

Seliph's Artwork from Fire Emblem: Genealogy of the Holy War 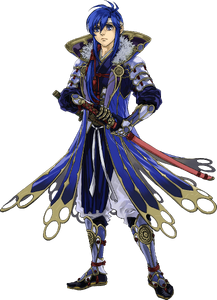 Artwork of Seliph in Fire Emblem Heroes, illustrated by Sata
Add a photo to this gallery

Retrieved from "https://hero.fandom.com/wiki/Seliph?oldid=1848446"
Community content is available under CC-BY-SA unless otherwise noted.