Guards of the Galactic Senate

Protect the Chancellor and other officials

The guards of the Galactic Senate wore striking robes of blue, symbolizing the Senate's supreme authority and the long tradition of its wise and rule. The large crest and simple drape are ceremonial effects rather than functional designs.

The best and bravest members of the Senate Guards are selected to become Commandos, that carried out secret missions on Coruscant as well as elsewhere in the galaxy. Their proud tradition is one of the most cherished in the Republic they serve.

During his rise to power, Palpatine seized control of all Senate security, consolidating the Blue Senate Guard under his direct personal authority. With the decline of the Republic, the Blue Guards would eventually be phased out by Imperial Stormtrooper patrols and the Red Guard in the Emperor's service. 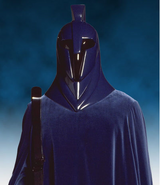 Senate Guard's Funko Pop!
Add a photo to this gallery
Retrieved from "https://hero.fandom.com/wiki/Senate_Guards?oldid=1731469"
Community content is available under CC-BY-SA unless otherwise noted.