Heroes Wiki
Register
Don't have an account?
Sign In
Advertisement
in: One Piece Heroes, Anime Heroes, Manga Heroes,
and 37 more

Prevent Blackbeard to destroy Marineford (succeeded).
Request his superior Kong to have a retirement (succeeded).

Sengoku the Buddha was the fleet admiral of the Marines during the first half of the series. He was the successor of Kong and the predecessor of Sakazuki. He was also one of the major figures along with Whitebeard, Shiki, and Monkey D. Garp during the times when Gol D. Roger was still alive, and still continues to be in the present, even after his retirement from the Marines. Sometime during the timeskip, he became a General Inspector.

He cared deeply for Donquixote Rosinante as his own son.

Fleet Admiral Sengoku, also known as "Sengoku the Buddha", was the supreme commander of the World Government's military force, the Marines. One of the few who still knows the seas from the olden days, he's even respected by figures like Whitebeard. He is stern and business-like, which often puts him at odds with his old friend Garp, whom he occasionally bickers with. He has eaten the Human-Human Fruit (Hito Hito no Mi), Model: Buddha, a Mythical Zoan-class Fruit which allows him to turn his body into a giant, golden, Buddha-like entity. He is one of the few people in the world that can use all three forms of Haki, and is the only Marine among them.

After the battle at Marineford, he resigned from his position because of his doubts about the World Government's actions, and thus personally nominated Admiral Aokiji to be his successor. Two years later, he's a General Inspector◊ for the Marines, so he hasn't totally retired from business yet.

Sengoku is a tall, fair-skinned and muscular, yet spry, roughly middle-aged man with a long braided beard and a mustache. He is usually seen alongside his pet goat. His cap covers his hair, which is set in a large afro. His afro was revealed after using his Devil Fruit powers and having his cap knocked off.

He typically wears black-rimmed glasses and a white and gold full Marine admiral uniform that is adorned with medals. The most distinctive features of this uniform are a life-size seagull on top of his cap and his oversized Marine coat which he wears like a cape. His coat has the kanji for justice, in blue, emblazoned on the back.

Twenty years before the present storyline, when Sengoku was already an admiral, he did not cover his afro and sported only a mustache. During his orders to Saul to bombard Ohara, he wore less-regal looking attire than he does in the present storyline, a simple black tank top, blue jeans, and his glasses, which is unlike a typical admiral's formal suit; the only Marine related attire he wore at the time apparently was his Marine coat, draped over like a cape. However, when he was fighting Shiki in Marineford, he was wearing a black double-breasted suit with a blue tie under his coat. Fourteen years ago, still as an Admiral, he is seen wearing a white suit with a floral button dress shirt underneath and begins to grow his trademark braided goatee albeit much shorter then it is now.

In his youth he also did not cover his afro and he lacked his beard.

As a child Sengoku had his trademark afro and he was seen wearing a karate uniform with a black belt tied on his waist.

During the two year timeskip, Sengoku aged with his hair turning grey. His former uniform is now replaced with a more casual wear during his retirement. He is wearing a dark blue shirt with red and green zig-zag patterns, orange tie with white marine shorts, and a Marine coat.

As the former commanding officer/Fleet Admiral of the entire Marine force, Sengoku had absolute power over every action the Marines do, including summoning a Buster Call, including granting and removing a Shichibukai's title at any time, provided they meet the criteria for either. The only ones that are above him and command him are the Gorosei and Commander-in-Chief Kong. However, with his resignation came the loss of such authorities.

Twenty two years ago, when Shiki was causing havoc in Marineford hearing about the capture of Roger, Sengoku fought alongside Garp and together, they were powerful enough to subdue him, whilst destroying half the city in the process, and also keeping him imprisoned in Impel Down.

Even without his Devil Fruit powers, it is implied that he has enormous strength, enough to effortlessly hold down an enraged Garp with one hand. Being a prominent figure in Roger's era, Sengoku continues to be one of the most feared and prominent figures of the One Piece world.

Sengoku is renowned for his tactical and strategic genius by Marines and pirates alike: he is mainly responsible for all the Marine maneuvers deployed throughout the Whitebeard War at Marineford, such as forwarding a plan to all Marines that Portgas D. Ace was to be executed ahead of the official schedule with the intention that the opposing pirate forces would intercept the message and lose their composure. He then conspired with Admiral Akainu in a plot to derail the alliance between Whitebeard's core divisions and the 41 independent New World pirate crews assisting by directing a 20-strong Pacifista division to target only the non-Whitebeard division pirates, and it was possible that the earlier transmissions regarding Ace's true parentage was not only an act of public justification but also to demoralize those pirates who were undermined by the Roger Pirates. With Akainu's persuasion, Sengoku's plan managed to drive one of those captains to attempt assassinating Whitebeard himself, and while the blow was not fatal, it did further debilitate Whitebeard's already hazardous condition.

He operated his strategies while keeping close in mind the various powers of his greatest subordinates, especially the Marine Admirals: raising Marineford's siege walls in conjunction with Akainu's "Ryusei Kazan" to rout the allied pirate forces and destroy Whitebeard's flagship, the Moby Dick while protecting the brunt of the Marine garrison from the damage.

Sengoku ate a mythical zoan class devil fruit, Hito Hito no Mi: Model Daibutsu. He transform into a giant golden buddha. He gain immense strength hurting Monkey D. Luffy's gear third defense. He can unleashed a shockwave against from his palm. Despite of his buddha size, Sengoku has tremendous speed. 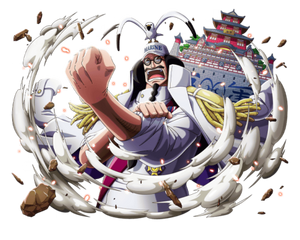 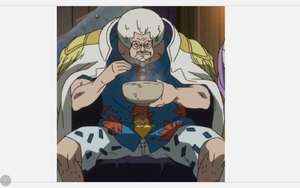 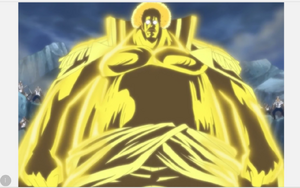