NOTE: This page is for the mainstream version of Serena. For the anime version of the character, view Serena (Pokémon the Series).

Serena
Yvonne Gabena (in the manga)

Put an end to the evil plans of Team Flare (game, anime and manga; succeeded).
Become the champion of the Kalos League by defeating the Elite Four (games; succeeded).

Serena (セレナ) is a Pokémon Trainer in the Pokémon X and Y games.

Serena has honey hair with grey eyes and wears a dark pink hat with a black hatband and white sunglasses. She also wears a black tank top, a red double waist side buttons pleated skirt, black thigh high stockings, and black sneakers with a pink semi-circle on it. She carries around a pink bag with black decals on it. She has a Mega Ring on her left wrist.

Serena is a young woman who lives in Vaniville Town with her mother, Grace and her friends Tierno, Trevor, Shauna and her next-door neighbor Calem. The five of them form a bond almost instantaneously and they decide to go on their Pokémon adventures together.

Also, unlike her player counterpart, she ties her hair in a ponytail and does not wear a hat.

Serena has a counterpart named Y, who is a Sky Trainer. She is friends with X, Shauna, Tierno, and Trevor. She tried to get X to leave his house but she failed. X then decided to go on a journey with the others after Xerneas and Yveltal went on a rampage on their hometown, Vaniville Town. Her full name is Yvonne Gabena. 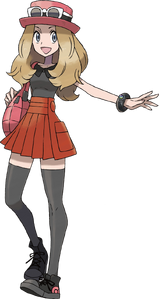 Serena in Pokémon X and Y 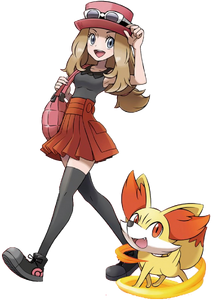 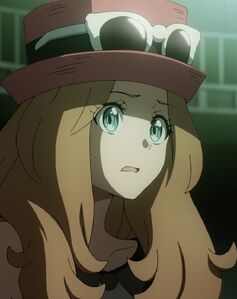 Serena in Episode 3 of Pokémon Evolutions. 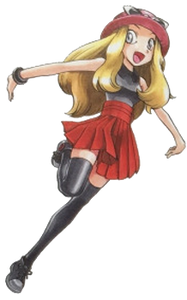 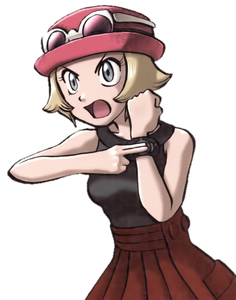