Serena (セレナ?) - Means ready and calm from the latin name "Serenus". The name may also come from the Greek "Siren" with the same meaning. Serena also means "alarm/song" in Romanian.

Serena is a 13 year old girl who bears great resemblance to her older sister, Maria. She has warm brown hair reaching past her shoulders with light pink butterfly clips that surround the back of her head like a wreath. Her eyes are light blue. She wears a white dress with detached sleeves and yellow waist ribbons over a red shirt, complete with red tights and yellow shoes.

The Relic she wore was Airgetlam. It was largely silver-white in color, with light yellow and blue accents.

Serena is Maria’s younger sister who successfully became a Symphogear user and displayed unparalleled talent. With her calm and gentle personality, she feels hesitant to use her gear’s power for the purpose of fighting. Her tender singing voice soothes Maria’s soul, and her smile has become the very foundation of Maria’s determination.

Serena owned the Relic Airgetlam (the name was never explicitly disclosed, although it appeared in the activation song. It was never officially confirmed.). As a Symphogear user, Serena has the ability to fight Noisewith the use of the anti-Noise armour, the Symphogear, that clads her. As an "Attuned" she can use the Power of Song (歌の力 Uta no Chikara?) to summon her Armed Gear to fight.

Superb Song - The special property of Serena's superb song is the ability to manipulate energy vectors. It's categorized the same as Hibiki's song, since their abilities are very similar to each other. Six years ago, using a mechanical devise the Albino Nephilim was awakened and rampantly discharged massive amounts of energy. Serena manipulated the energy and used it to energize the Nephilim, bringing it back to its ground state and saving the lives of Maria, Nastassja and the F.I.S. personnel. However, the burden of taking on the Nephilim's enormous energy, coupled with the backfire from using the Superb Song, left the inside of Serena's body in shreds. As her song has absolutely no offensive capabilities or uses whatsoever, one could say that it was a special song intended solely for the purpose of saving others. Her Superb Song is strong enough to create small earthquakes. 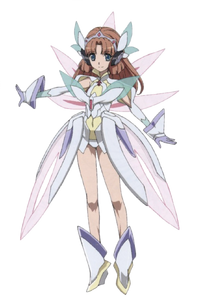 Retrieved from "https://hero.fandom.com/wiki/Serena_Cadenzavna_Eve?oldid=1758102"
Community content is available under CC-BY-SA unless otherwise noted.