Sometime during the 20th century

Make the existence and utilization of anomalous objects known to the public. (ongoing, succeeded and failed in tales)

The Serpent's Hand is an anti-heroic group in the SCP Foundation universe. It is a small but formidable militant leaderless resistance organization opposed to the SCP Foundation and the Global Occult Coalition, whom it wages guerrilla warfare against.

It has been responsible for the freeing of several SCPs in the past, as well as the loss of several GOC cells. It is considered a "para-environmental terrorist organization" by the GOC and their agents have standing shoot-on-sight orders for all Hand agents. Despite this, the Hand has on numerous occasions proven itself to a benevolent force which only seeks to enlighten humanity and protect knowledge.

Whereas many organizations involved in the supernatural and paranormal in the Foundation universe aim to suppress public knowledge of anomalous (supernatural) events and objects in order to preserve a sense of normalcy, the Hand seek to spread awareness of the anomalous to the public and integrate the anomalous into society.

This drives them to extreme opposition to the GOC, who see the anomalous as in and of itself anathema to the human race and regularly destroy anomalous objects, often using anomalous technology to do so themselves. They are also opposed to the Foundation due to its containment of anomalies, including imprisonment of sentient anomalies, although they do not despise them as much as they do the GOC.

Many members of the Hand are anomalous themselves or are heavily connected with anomalous humans or humanoids (such as anomalous friends or family).

As a leaderless resistance organization, the Hand does not have any organizational structure; the only true requirement for joining the Hand is to decide that one is a member and carry out acts in the name of the Hand.

This is only partially understood by the Foundation and the GOC. However, most members are known to utilize portals to an extra-dimensional library known as the Wanderer's Library, the nexus of all realities.

One prominent member in the Hand, often (mistakenly) theorized to be its leader, is an enigmatic female figure known as L.S. It is possible that L.S. is Alison Chao (also known as the Black Queen), the daughter of Dr. Gears, as it may be an acronym for "Little Sister".

The Serpent's Hand also overlook the information contained in the Wanderer's Library regarding several anomalies, people and groups which exist in the multiverse. While discussing these information members will leave funny comments which shows that the Serpent's Hand is comprised of young people who from time to time don't take things much seriously.

The Serpent's Hand originally started out in the ancient times as a warrior cult known as the Hand of the Serpent. This cult was made out of long-lived monks who worshipped the Serpent as the god of knowledge and the creator of the Wanderer's Library and believed that the spread of knowledge was greatest honor one might receive. However, as time went on the cult slowly died out, leaving behind their teachings.

Eventually in the modern age, a group of people found the teachings left behind by the Hand of the Serpent and became inspired to spread the knowledge of the universe to the entire world and together reformed the group into the New Serpent's Hand. However, in their goal of spreading the knowledge the group faced opposition from the SCP Foundation and the Global Occult Coalition who were determined to keep humanity ignorant of the anomalous world, and because of this the Hand deemed them their enemies and would come into conflicts with the organizations.

One day, for unknown reasons, every single anomaly which ever existed was either neutralized or normalized, much to the shock of all of the GoIs. In the aftermath, the Serpent's Hand began losing most of its members as they didn't have a cause to fight for anymore before being completely destroyed by the Chaos Insurgency.

In December of 2018, after the Veil of Secrecy was destroyed as a result of Mekhane's appearance on Russia and the destruction of SCP-610, the anomalous world became public knowledge, which allowed the Hand to finally go public. They proceeded to fuel several riots in Mexico and coupled with the Chaos Insurgency handling the drug trade, it eventually lead to a civil war in 2021. In 2022, the war arrived to Texas/New Mexico border which prompted the Foundation to send its forces to stop the Hand and the Insurgency.

When the Foundation began using SCP-3475 to force the concepts of the anomalous out of humanity's collective consciousness this accidentally caused everyone to forget everything which included even normalcy. This also caused several manifestations of SCP-2747 which went on and destroyed parts of reality which also included people and soon began spreading to other realities such as the Wanderer's Library, destroying much of the Serpent's Hand, leaving only X.N. and H.Y.U. as the last remaining members.

The Hand and the Serpent eventually decided to go all in and forcefully grant humanity all of the knowledge. They devoured the knowledge of the Tree and spread it throughout the world in order for humanity to ascend to paradise. However, they did so seemingly in secrecy as one of the Horizon Initiative's holy texts about Saint Manos which prophesied this event became corrupted and lost.

Relationships with other anomalous factions

The Serpent's Hand refers to the SCP Foundation as the "jailors", for locking up the paranormal, and believes that keeping the secret from the public is wrong. Despite this, the two groups have secretly worked together against more dangerous anomalies and open hostilities are rare.

The Global Occult Coalition on the other hand is viewed with extremely open hostility by the Hand, due them destroying anomalies and are often called "bookburners" because of this. The Hand is only known to use unprovoked violence against the GOC, since they regard them as the Hand's archenemy.

Due to their incompetence, the Unusual Incidents Unit when encountering members of the Hand are ordered to comply with orders given by the members despite their opposition to the group since the UIU agents are no match for the Hand with their knowledge and magic.

The Hand appears to have friendly relationships with the Manna Charitable Foundation, some non-violent groups of the Church of the Broken God, and the Fifth Church, while the Hand appear to have a complicated relationship with the Office For The Reclamation Of Islamic Artifacts, the Horizon Initiative, and Marshall, Carter and Dark Ltd. as they sometimes help each other out while other times have hostile confrontations.

The Children of the Scarlet King and the Chaos Insurgency, the latter being referred to as the "madmen", are enemies of the Hand, despite sharing the same goal of breaking the Veil and utilizing anomalies.

Apparently the Oneiroi, Dr. Wondertainment and the Wandsmen have ties with the Hand and appear to be on good terms.

Some members of the Serpent's are also members of the group known as Are We Cool Yet?, but appear to be some of more pacifist in compared to most AWCY? members.

Jude Kryiot and JJ of the Gamers Against Weed are also members of the Serpent's Hand. Despite this, the Hand don't affiliate with the group and nor do they wholly approve of their actions.

The Serpent's Hand appear to view Sarkicism as a major threat to the world, and think that this dangerous religion should be stopped, but still accept former members of the religion as seen with Vlad, child of SCP-4294. The Hand also have similar view to SAPPHIRE due to their hostile and unreasonable nature towards the anomalous and religion, which prompted the Hand to refer to them as the "Deniers".

Despite referring to the Faeries as "friends" and together crafting the Blue Lily Chains as a sign of friendship, a large number of the Serpent's Hand regard them as hostile misanthropic monsters who hate humanity for no real reason and believe that they deserved to have their names lost.

The Serpent's Hand is aware of the existence of the Three Moons Initiative and some members seem to view them as some lunatics, but despite this one member invoked the name of the Initiative's god, Jalakåra.

SCPs Associated with the Serpent's Hand 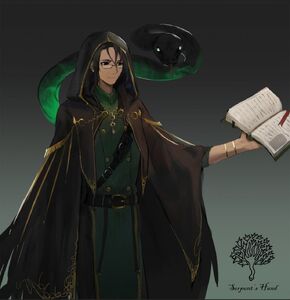 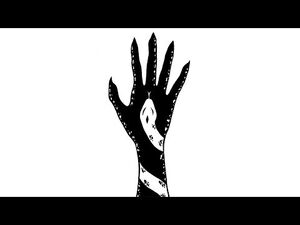 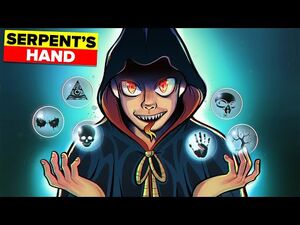