Escape the Scarlet King (succeeded for a time)

People of the Valley:

The Serpent also known as Nahash and SCP-4343, is an anti-heroic serpent figure in the SCP mythos based on the Serpent from the Bible. He is established as a fundamental figure in the universe, worshipped by the Wanderer's Library and the Serpent's Hand, and the brother of Ananteshesha/SCP-3000.

Due to lack of canon in the SCP universe, there have been several stories telling the origins of the Serpent. The readers are free to choose whatever origin for their headcanon.

Originally, before the creation of the universe there were two opposite forces that helped shape creation. One force was the existence of "IS", creation and reality that existed which took form of the Wanderer's Library, SCP-1726 and SCP-4001, while the other was the reality of "IS NOT", non-existence. The two forces combined their powers to create all of reality allowing Mekhane and Yaldabaoth to seed the newly created universe with life. The remnants of the two forces would then manifest in the form of two brothers, the Serpent and the Eel, which became revered as holy figures by the people of the city of Audapaupadopolis, and its king, Adam el Asem proclaimed to be the sovereign of everything related to "IS".

Nahash was originally a protector of the Tree of Knowledge and kept watch over its secret power on behalf of the All-Mighty. He spoke of all the wonders that came with the Tree's power, the power that would test man's skill and spirit. His sister, Hakhama, was the guardian of the Tree of Life, keeping watch over its gifts.

During the Scarlet King's conquest, Nahash saw him coming from the east, rising out of the Abyss to consume creation. Nahash became frightened by this and, out of fear, acted out of line. He wanted to attack first, so he spoke to Hawwah of the People of the Valley, since she was wiser than her husband, and told her of what would happen. He asked her to use the gifts of the Tree of Knowledge against the Daevites, but she declined.

Nahash then spoke to Qayin, warning him of the king in the east and revealing the secret knowledge to him, teaching him the most powerful magics and spells. However the knowledge became a burden on Qayin, his mind strained from this burden, eventually leading him to striking down his brother, Hevel, with a stone, not killing him, but getting Qayin banished from the valley.

After this, the Daevites took control of Hevel, who became known as Ab-Leshal, and attacked the Valley, killing most of the people while those who were spared were taken as slaves. As Hakhama was shattered during the attack and the Tree of Knowledge burned, Nahash fled, first to the space-tower at Babel, and later on to the Wanderer’s Library, where he remained in penance for his participation in these events. Upon seeing that Hawwah had survived the attack after being left for dead, Nahash approached and helped her with her injuries. He then informed her what had happened and what was currently going on, before Hawwah became furious at him for cursing Qayin and abandoning them. Nahash tried to apologize to her, but she then requested him to grant her knowledge of the future since he owed her. He complied and gave her the dark knowledge, and following that he returned to the Library once more.

In ancient times, a warrior cult was formed worshiping the Serpent as the creator of the Library and became known as the Hand of the Serpent. This cult was formed from smart long-lived monks, but eventually as time went on the cult slowly died out, leaving their teachings behind. However, in the modern age, several people came across these teachings which stated that the spread of knowledge was one of the greatest honors that existed and this inspired this group of individuals to christen themselves the New Serpent's Hand. Just like the previous iteration, the new Hand also worshipped the Serpent as the source of knowledge and dedicated their lives to reveal the true nature of the world to humanity, causing them to come into conflict with the SCP Foundation and the Global Occult Coalition.

The SCP Foundation eventually found the Serpent residing on SCP-4343-A, an island which can only accessed through a cave in a mountain in Azores, trapped within a marble building where only his head is visible. The Foundation designated the serpent SCP-4343 and found out that the serpent possessed great abnormal powers, mutating native animal life on island into monsters, one of which possibly became SCP-682, and when the serpent opened its eyes, or made sound would cause an anomalous event on reality, which would be referred to as "Black Events". The Foundation tried to interview SCP-4343, but they learned very little due to its cryptic nature.

During its time under the Foundation custody, the Serpent caused several Black Events: In 1999 it improved the lives of 31 civilians; in 2002 an incantation from an unknown source was heard above the city of Mekka, Saudi Arabia, causing mass panic; in 2004 the Serpent improved the recovery of around 20 people who were suffering from deadly diseases; in 2007 it gave 17 civilians in China reality-bending powers, with a few having realized the truth that the Serpent wanted to show; in 2010 it caused the Hekla volcano to produce winged humanoid entities speaking an unintelligible language and seemed to be in a form of ecstasy before completely vanishing.

The Way It Ends

When Calvin Lucien and other members of the Chaos Insurgency began hunting down the entire of the O5 Council in order to heal reality, he and Adam Ivanov entered the Wanderer's Library with the intent of assassinating O5-10.

However, after learning almost all of the information contained within the Wanderer's Library, O5-10 was able to overpower the two insurgents and took the form of the Serpent during confrontation. After Adam used the Spear of the Non-Believer to kill the Overseer, the Serpent arrived at their location and began analyzing the spear it as he was unable to perceive it, before the two insurgents arrived to talk to him.

The Serpent congratulated them on being alive after crossing the boundaries between IS and ISN'T and proceeded to hand the the spear over to them before teleporting them back to the forest where they were able to access the Way to the Library.

In the tale "When We Came Home", after Mekhane was repaired, Nahash returned from his exile to help his sister and humanity to fight against the Scarlet King. However, his redemption was brief as he was quickly ripped into two by the Scarlet King.

After learning that the Kaiju-like monsters such as Tokage-tako had returned and began causing chaos on Earth, the Serpent left the Library and decided to confront them. When MTF Eta-5 piloting SCP-5514 were being overwhelmed by some LSAs which achieved antimemetic properties, the Serpent came to their aid and guided the MTF in killing the monsters. Deciding to work together in preventing the world to be destroyed by the LSAs, the Serpent and the MTF went to the coast of Greenland where it would act as bait for Tokage-tako. Soon after, Tokage-tako arrived and immediately attacked the Serpent. As the two beings struggled with each other, the MTF using SCP-5514, grabbed the evil monster and slammed it on the sea, allowing the Serpent to get freed from its grasp. Tokage-tako then tried to attack both the Serpent and SCP-5514 with its laser beam, but the MTF were able to evade it by using their shoulder mounted railgun, the Beowulf-Sigurd Rail, as a shield and sacrificing it in the process. The three beings then charged into each other, but the monster was able to use its multiple tentacles to grab both the Serpent and SCP-5514, forcing the MTF to use their plasma wristblade to cut the tentacles off before kicking Tokage-tako away from them. However, the monster then proceeded to steal SCP-5514's sword and used it to destroy the mech's legs before pinning the Serpent to the ground and releasing a beam to the sky. At that moment the MTF decided to use SCP-5514's solar energy to fire at the monster, successfully disintegrating it top half, killing it for good. In the aftermath, the Serpent and the Global Occult Coalition went on to kill most of the remaining LSAs that were still causing havoc.

In August 11 2119 in which the world was slowly ending, the Serpent was summoned when SCP-1203 was sacrificed by the Serpent's Hand as part of a ritual. The Serpent was summoned to help reset the world, but this time it decided not to after doing it so many times and then committed suicide by going into the sun. Following its death, the Wanderer's Library was left in disarray and the hive-mind behind the Library's Archivists destroyed.

As its title says, the Serpent resembles a giant snake with scales, but other than that is unknown except that it possesses peacock feathers, emerald eyes and is as vast as the mountains. In SCP-4343's file, it is mentioned that its skin resembles that of a dragon and that it possesses three eyes in the visible side of its face. According to the Librarians of the Wanderer's Library, this appearance isn't its actual appearance but rather one of its many appearances it takes while on Earth.

When interacting with Calvin and Adam, the Serpent took the appearance similar to that of an ordinary Librarian, a tall and lean robed humanoid whose face couldn't be seen, with the only difference being the color of his robe which a more vibrant green than those of other Librarians and was described as possessing a simpler appearance than them.

The Serpent was shown as being enigmatic and cryptic and often tested men with difficult choices, but it does genuinely care for humanity, contrary to the mythology. Being the embodiment of knowledge the Serpent is very wise to an extent, but it appears to be also somewhat of a coward as when the Scarlet King's army conquered its tree, the Serpent fled leaving the People of the Valley on their own. However, the Serpent still wanted to help humanity, using its powers and knowledge to improve their lives and tried to fight the Scarlet King in the final battle.

The Serpent is the embodiment of knowledge and creator of everything that exists. It appears that the Serpent is on a same level of powers as Mekhane and SCP-3000, but it was much weaker when compared to the Scarlet King. As SCP-4343, it was capable of manipulating reality simply by opening its eyes or making a sound, and was also able to manipulate the biology of animal life surrounding it, although it is unknown if it did it willingly or involuntarily. It is presumed that it can also manipulate the "smoke", designated SCP-4343-1 by the Foundation and designated "PROJECT 001" by the Office of Reclamation of Islamic Artifacts. The Serpent would later claim that it didn't actually create the Wanderer's Library or vise versa, but that they had formed a strong symbiosis between each other and their existence depended on the other. 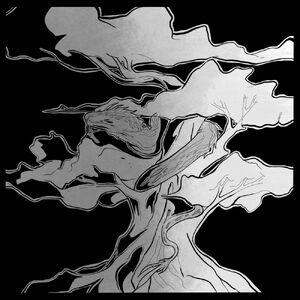 The Serpent with the Wanderer's Library. 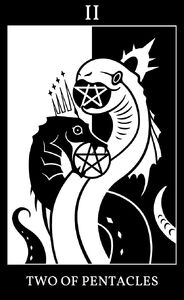 The Serpent with his brother Ananteshesha. 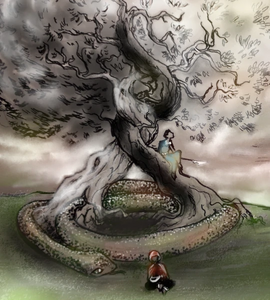 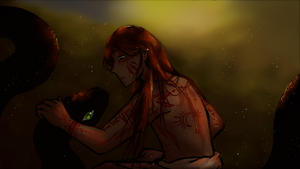 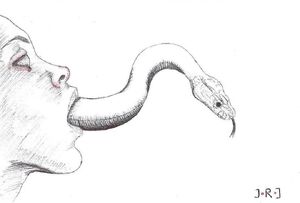 Nahash and Hawwah from "Sins of the Mother" in the Wanderer's Library. 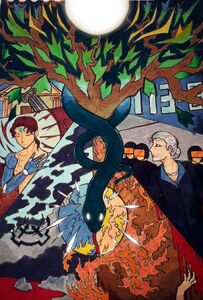 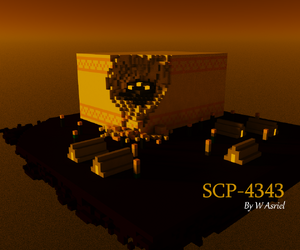 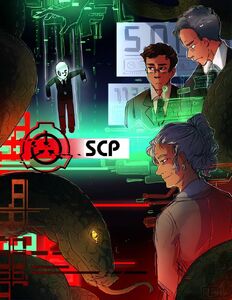 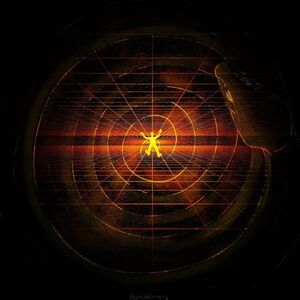 From "Found in a dusty corner of the Library". 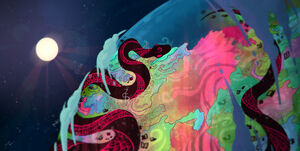 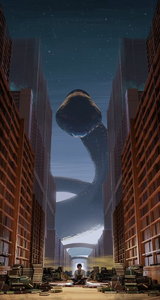 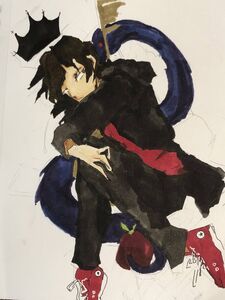 The Serpent with the Black Queen. The Serpent with Mekhane and Dr. Clef.