Seto Kaiba or just commonly referred to as Kaiba, is one of the main characters of the anime and the manga called Yu-Gi-Oh!. He has a younger brother named Mokuba, whom he always shows compassion for, and Priest Seto is his Egyptian incarnate. He is the CEO of Kaibacorp, and aims to become the world's greatest player of Duel Monsters. To accomplish this goal, he must defeat his arch-rival, Yugi Muto. He is the modern-day lookalike reincarnation of Priest Seto himself, the original keeper of Blue-Eyes White Dragon. He seems to like to mock Joey Wheeler, similar to Priest Seto mocking Mahad.

Seto Kaiba doesn't believe in friendship or the supernatural. He prefers to be alone, thinking it makes him stronger. He also has a huge ego and is very arrogant and intelligent. He is considered an anti-hero as he is usually selfish but he helps Yugi and his friends sometimes at defeating common enemies.

As a child, Kaiba was a bright boy, protective of his brother, and mainly selfless. After he and his brother were adopted by Gozaboro Kaiba, Kaiba was forced to undergo vicious studying and learning habits to allow him to understand how business works at its best. On Seto's birthday, he was given a 2% share of KaibaCorp (in the English anime, 10 million dollars) and was told that although he could spend the money any way he wished, he must return one hundred times (in the English anime, 10 times) the amount in one year. Seto returned all the money within a single day. He did this by buying 51% shares of a small company that cares for its employees, Seto then made the president buy it back, under threat of it being shut down and leaving the employees jobless.

Kaiba will stop at nothing to get his way, going so far as to drive his stepfather to suicide so he could inherit Kaiba corp. He is also seen as a master of all games, but his favorite is duel monsters. Kaiba proves to be an incredibly greedy and sadistic monster with a sociopathic and borderline insane personality; having found out that Yugi's grandfather had the Blue-Eyes White Dragon card, the two dueled for the intensely rare card, of which there are only four. As it turns out, Kaiba already has the other three of them and does not even need a fourth card. When Kaiba wins with these three, he realizes this and tears his prize to pieces, breaking Sugoroku Muto's heart. Yami Yugi takes over and duels Kaiba, and manages to win.

As it later turns out, Kaiba had lost his corruption, which formed itself into his grotesque evil side, the Imitator of Death, later in the series. This, however, did not get rid of all of Kaiba's evil, and only made him a better person, who was still sadistic and insane yet now fiercely protective of Mokuba as well.

From here, Kaiba became more of an anti-hero than a villain, and usually does nothing worse than trying to get in Yugi's way or make fun of Joey. In the majority of the ; Duelist Kingdom arc, he was out to save his brother Mokuba, who was kidnapped by Pegasus J. Crawford, but was sealed inside a card after being defeated by him. After Pegasus was defeated, and Mokuba, Sugoroku, and himself released, Seto set out to become better than Yugi, and collect all three Egyptian God Cards. He received one, the Giant God Soldier of Obelisk, from Ishizu Ishtar, and created a tournament called Battle City so he could get the other two (making it a rule for the loser to fork over their rarest card to the winner). Here, he was counting on the Ghouls entering (as they possess the two God Cards), however, they kidnapped Mokuba (though he escaped) and forced Yugi and Joey to duel each other to the death, but they both survived. He showed his ruthless side again during the Shadow Games, where he was more concerned about seeing the Egyptian Gods in action than about the health of the duelists, which was several times in life-threatening danger.

Kaiba lost to Yugi in the semifinals, and with the duel, the Giant God Soldier Obelisk. After Yugi defeated Marik in the final round, Kaiba, as a sore loser, blew up the duel tower but warns every ones to get off the island, escaping with Mokuba aboard his private jet they managed to escape the explosion. However, he was forced to fight alongside Yugi again when Dartz attempted to take everyone's souls for the Orichalcos. He defeated Dartz's henchman Amelda in a duel, causing Amelda's soul to be taken. He and Yami Yugi dueled together against Dartz. Kaiba lost the duel and his soul, but Yami defeated Dartz, releasing Kaiba's soul from the Orichalcos.

From here, Kaiba never did anything even remotely evil. He hosted a tournament in which he did not enter, and in which the winner would face Yugi in the final round. His enemy, Siegfried von Schroider, attempted to use his younger brother Leonhart to erase all of Kaiba's data. But luckily, Kaiba had it all saved on backup, and this was foiled. Kaiba later entered the RPG to help Yugi fight against Zorc, realizing for the first time that everything unusual (such as Hell) was real and not just a trick (as he had thought for most of the show). He witnessed Yugi's duel against Dark Yugi and finally came to accept that Yugi is the king of games.

Though in the video game Yu-Gi-Oh! The Falsebound Kingdom, he is a playable protagonist with his own campaign, he appears as a boss in both Yugi's and Jonouchi's campaign. He uses all three Blue-Eyes White Dragons and has Polymerization to fuse them into the Blue-Eyes Ultimate Dragon. In Yugi's campaign, he appears in the level "Face-Off" to which he is forced to duel Yugi under Scott Irvine's orders. After he is defeated, he explains that he did it in order to rescue Mokuba to which the two then work together to take down Irvine. In Joey's campaign, which is a prequel, he appears as his role working for the emperor and sent to destroy Jonouchi's resistance group. Though Jonouchi wins the duel, Kaiba succeeds in destroying his resistance and they must separate and join up with Yugi. 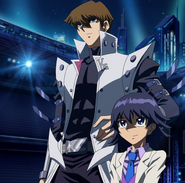 Add a photo to this gallery
Retrieved from "https://hero.fandom.com/wiki/Seto_Kaiba?oldid=1218370"
Community content is available under CC-BY-SA unless otherwise noted.