Swordsmanship with an Iai/Umbrella Sword

Locate and Kill Mitsurugi to avenge her fallen master. (formerly)

Setsuka is a character in the Soul series of fighting games. She debuted in Soulcalibur III. Known as The Resolute Avenger. She is a warrior out on a quest to kill Mitsurugi after the latter killed her master. She is also set to appear as a DLC character in Soul Calibur VI.

If there is one word that describes Setsuka, it's vengeful. Following the death of her master at the hands of Mitsurugi, Setsuka is hell-bent on killing the samurai for the sinful action. While she herself is aware revenge is often not the right decision, she feels that a sense of justice must be met after the evil deed Mitsurugi committed.

Despite her wrathful demeanor, she also has a more benevolent side. In her Soulcalibur IV ending, she spared Algol, making him choose the path he wished to follow.

After confronting Mitsurugi sometime around the events of Soulcalibur V, her vengeful side also diminished, after realizing that killing Mitsurugi would yield nothing positive. She would go on to share this lesson with Patroklos Alexander, whose personality also changes as a result of this moral.

She was not a native of Japan. Others ignored her since she was young due to her appearance. Without a family, she had to turn to hatred and violence and ran away from her home, She wandered to a city where she meets a man named Shugen Kokonoe and giving her the name Setsuka. Her caretaker taught Setsuka techniques to protect herself, which Setsuka felted joy he praised her that made her devote to the training.

As years passed, Setsuka grew into a beautiful woman and learned to ignore those who still looked at her with disdain, One day, she received a letter from her master, whose destination was far away. It would take Setsuka many months to travel there and back. After a long journey, she found the man who took care of her ran a dojo in a small village. The caretaker tries to ask Setsuka many times to stay and train there, but she refused.

Once she returned, Setsuka found her master, injured and lying on the floor. This would prevent him from wielding a sword ever again. But the master tried to behave, even Setsuka couldn't hide her concern. While his lessons became more strict and demanding, he also showed her overwhelming love and bought her an elegant long-sleeved kimono, Setsuka's feelings grow stronger than ever.

However, at some point, Shugen was killed. Before dying, he told Setsuka his enemy's name: Heishiro Mitsurugi. Visiting his grave, she realized her feelings and fall in love with Shugen. Despite her master not wanting her live bound of vengeance, Setsuka decided to go on a journey to find the man who killed her beloved master. Several years later, She heard of a warrior named Nightmare, which she tracked down, believing he would lead her to Mitsurugi.

She continued her search for Mitsurugi, going through many towns and questioning the residents about Nightmare. The people warned her that Nightmare was too powerful to battle, telling Setsuka about how he emerged from countless wars. But she was not frightened by the stories. Once she found him, she wondered if she was strong enough to challenge him. In other to fight against Nightmare, she practiced constantly, hoped to obtain the excellent speed that her master had.

After her fight with Mitsurugi, Setsuka understood now and was mistaken to take revenge. She took up the Neve and traveled to Istanbul where she become a self-defense teacher to orphaned children. She also taught Patroklos Alexander, the son of Sophitia Alexandra, her fighting style during this period and told him not to indulge revenge, but ultimately ignored her advice. 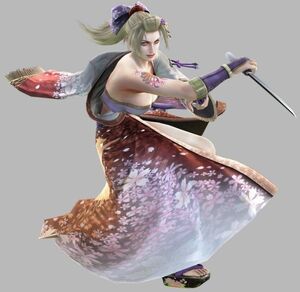 Retrieved from "https://hero.fandom.com/wiki/Setsuka?oldid=2074206"
Community content is available under CC-BY-SA unless otherwise noted.