Setzer Gabbiani is a playable character in Final Fantasy VI. He is a Gambler who lives on the wild side and owns the world's only airship: the Blackjack.

He is voiced by Ryōtarō Okiayu in the Japanese version, and by Crispin Freeman in the English version.

Setzer has long silver hair, violet eyes, and wears several layers of clothing under a black trench coat with a gold lining, though the in-game sprite shows the lining as brown. He is roughly average height, and thin. Setzer's face is scarred, though this is not visible in his game sprites until the mobile version. Setzer with his scars is the first character of the series to bear visible physical disfigurements.

Setzer cannot resist a gamble; he thrives on risks—such as his planned abduction of Maria—and never passes up an opportunity to prove his skill. Most of his scars come from gambling sessions gone wrong, although some also come from airship accidents.

There are aspects of Setzer's character that fit the "ladies' man" archetype, such as his willingness to gamble his airship for Celes Chere's hand in marriage, which were exaggerated in his Kingdom Hearts appearance. Setzer acts like a happy and likable person up front, but is still hurt by a great loss and distracts himself with gambling. 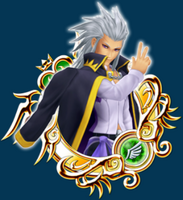