The Seven Deadly Sins (七つの大罪, Nanatsu no Taizai) are the strongest and cruelest order of powerful Holy Knights in the Kingdom of Liones, led by their captain Meliodas. They were formed by seven brutal criminals who were all convicted for serious crimes and carved symbols of beasts onto their bodies. The Seven Deadly Sins were framed for the murder of the Great Holy Knight of Liones, lable as traitors and villains in the land of Britannia as a result. In response, they scattered and went into hiding for ten years. Elizabeth, the third princess of Liones, enlist their help to save the kingdom from the tyranny of the Holy Knights. They are the titular protagonists of the manga/anime series The Seven Deadly Sins.

The Sins were actually criminals that joined the order for their own reasons, and a number of them are good people at heart. A few of them however aren't exactly the nicest of people. However, they can be very dangerous when push comes to shove. 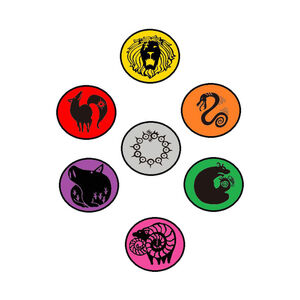