Professor Severus Snape (January 9, 1960 – May 2, 1998), also known as The Half-Blood Prince, is an anti-hero from the Harry Potter series. Originally making his debut in the series as the false main antagonist of The Sorcerer's Stone, he eventually went on to become an antagonistic major supporting character throughout most of the franchise until revealing his ambitious side as the eponymous titular character and main antagonist of Half-Blood Prince. His loyalty was debatable, but he was finally revealed to be on Dumbledore's side after his death at the end of Deathly Hallows.

He was portrayed by the late Alan Rickman.

Severus Snape, as a young man, was an extremely insecure, vulnerable and painfully embittered person with a colossal inferiority complex. From the year dot, he strived to be part of some greater cause for the sake of recognition, admiration, authority or, if need be, fear. He grew up in complete and utter poverty under a vicious father and a witch mother, leading him to be a very fearful person. This also drew him towards Lily Evans, to whom he developed an increasingly powerful love for - however, though she ambiguously regarded him as a friend, she did not return any romantic affection.

Snape's prejudice was very debatable, as he was renowned for hating Muggles like Petunia Dursley, but he did not appear to regard Lily in the same light because she was Muggle-Born - this might have been influenced by his love for her. He would turn cold and callous towards what was seen as racially inferior by others if it meant being liked by his peers, shown by him viciously scorning Lily's blood status in front of James Potter simply so that he didn't lose face - an act that he deeply regretted afterwards.

Snape was a determined and highly driven man, and quickly developed supreme confidence in his own talents and abilities. He was, in his own right, an extremely powerful wizard, so this assurance was not unjustified. He would also become critical towards the magical powers of others, particularly Hogwarts students he didn't like. However, despite his immense prowess as a sorcerer, Snape relied on his genius-level intelligence and power of mind to survive in a world where magical powers were considered the defining trait of everyone around him.

He showed himself to be diabolically cunning and calculating to an extreme, capable of creating elaborate and highly effective plans to achieve difficult and sometimes transparent goals in very short amounts of time, which is shown frequently throughout the series. This is shown by how he deduced that something had happened to Harry when he disappeared into the Forest with Umbridge. It was shown again by him creating a convoluted way of planning out the Battle of the Seven Potters without directly endangering Harry, or himself, whilst simultaneously keeping Voldemort's perception of his true allegiance at bay.

Snape's intelligence made him very quick-thinking, shown during a Quidditch match when he saw Harry's broom go out of control, at which point he quickly deduced it was cursed and immediately conjured a counter-curse to reverse it's effects - however, this made people, especially Harry, think he was doing the opposite. Snape later volunteered to referee the next match to ensure such an incident did not repeat itself a second time.

As a teacher, Snape was externally bitter, cynical, precise, cold, sarcastic, aloof and apathetic. He was very direct in his opinions of others and did not regard people's feelings very highly. His standards for his classes were much higher than that of the other professors, as he only allowed students with the very best grades to continue into advanced study. He seemed to favor Slytherins against all other Houses, possibly because of his experiences with Gryffindors as a child and him coming from Slytherin. However, Snape remained professional and gave good grades to all who did good work, even if he hated them, and bad grades to those who failed, including those in Slytherin. He was not liked very well among most Hogwarts professors, but he was highly respected for his experience, power and knowledge.

Snape, being such a powerful wizard, possessed an encyclopedic and extremely precise knowledge of various advanced types of magic - he was one of the finest Occlumens of all time and a highly accomplished Legilimens. His Occlumency was so great, Voldemort, the greatest Legilimens ever, never suspected him of treachery. He was also so learned in Potions that he could recite the origins, etymology and capabilities of various potions off by heart, and he could even correct a Potions handbook (An advanced potions book, which should have information that is accurate and effective) so that it provides quicker, more efficient and more precise ways of accomplishing the creation and usage of potions.

Snape was normally a very calm and reserved person, but he possessed a brutal temper that would infrequently get the better of him. He would react violently if he thought he was being pitied, underestimated or especially if he was being viewed as a coward. The most climactic episode where he lost his temper was in his famous duel with Harry Potter, where he turned furious and explosive when Harry used his own spells - that is to say, spells that he personally created - against him, just like James Potter would. This gave way to pride, as he freely described himself as the Half-Blood Prince.

Severus Snape was, finally an enormously brave man - throughout the course of the series, Snape placed himself in unimaginable danger every day of his life, in his efforts to protect Harry from any harm that came his way - he even protected Harry from a werewolf by covering his body over Harry, risking extreme physical harm to his person. Snape was a person who possessed a deep capacity for love. Everything that he did in the latter part of his life was motivated by his devotion to Lily Evans, whom he loved very deeply. He was one of Dumbledore's most reliable allies and in his role as a double agent, took great personal risk in ensuring Harry's safety at the hands of Lord Voldemort. 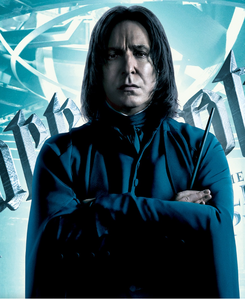 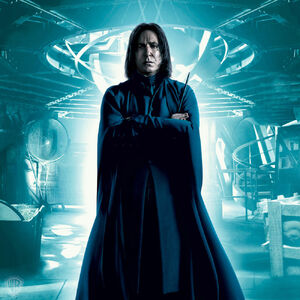 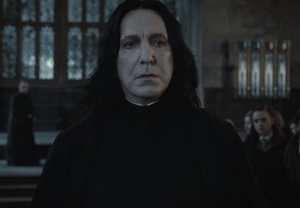 Severus Snape in Harry Potter and the Deathly Hallows: Part 2 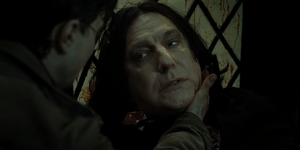 Harry with a dying Snape 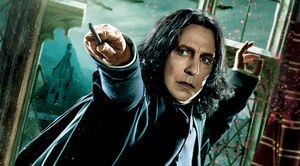 Retrieved from "https://hero.fandom.com/wiki/Severus_Snape?oldid=2146734"
Community content is available under CC-BY-SA unless otherwise noted.