Seymour Simmons is a minor antagonist in the first film of Transformers turned anti-hero in the same movie and a major protagonist in Revenge of the Fallen and Dark of the Moon and the minor character in The Last Knight.

He is the former head officer of Sector Seven's Field Agents. He is part of a long line of Simmonses who were head officers in Sector Seven. His great grandfather pulled N.B.E.-1, the first-discovered Transformer, out of the ice, and his grandfather and father prepared Sector Seven against the day that more N.B.E.s would arrive on Earth. He might come off as a jerk, but he takes this work very personally.

Agent Simmons went to the Witwicky residence when Sector Seven suspected that Sam Witwicky had contact with an N.B.E. they were tracking. Taking Sam and Mikaela Banes into custody, he got too into the bad cop role, threatening Sam with life imprisonment, threatening Mikaela's father's parole, and revealing Mikaela's own criminal record. This strategy nearly succeeded...until a seriously pissed off Optimus Prime decided to pay Sam and Mikaela's bail—by jumping right in front of their SUV, lifting it off the ground and tearing the roof off. Although Simmons tried to call for calm, the Autobots easily disarmed the agents. To Simmons' credit, he himself remained calm, while the guy on the left looked like he was going to wet himself.

Prime attempted to interrogate Simmons, who revealed that the only communication he was authorized to have with the NBEs was to tell them he wasn't authorized to communicate with them. He also refused to answer any questions from Sam and Mikaela about Sector Seven or how they knew of the Autobots. Annoyed by his attitude, Bumblebee released lubricant on him. As the Autobots left, Mikaela had Simmons strip as punishment for threatening her father. However, Bumblebee, Sam, and Mikaela were later recaptured.

After arriving at Hoover Dam (and presumably the longest shower of his life), Agent Simmons, in a new, clean, and higher-in-authority uniform, and trying the awkward role of good cop, told Sam and Mikaela that they may have gotten off on the wrong foot. Taking them to see the Mega Man, Simmons was told of Megatron's plans by Sam. However, Frenzy had infiltrated the dam and sent a message to the Decepticons, causing Starscream to attack. Sam urged Simmons to release Bumblebee, saying he would help, but Simmons stubbornly refused. Captain Lennox decided to apply some armed persuasion, which Simmons still refused to heed, leading to a standoff between the rangers and Sector Seven agents. But when Secretary Keller convinced them that losing was never an option for the rangers, Simmons reluctantly agrees. After Bumblebee reformatted the Cube, Simmons, Keller, Maggie Madsen, and Glen Whitmann went to the dam's archives, where they managed to send out an S.O.S. via an old radio in there, while Keller and Simmons provided cover fire from an attacking Frenzy.

Simmons' fate following the termination of Sector Seven is revealed — working for his mother in a deli shop. He does not like the job one bit (and probably doesn't like working for his mother either). When Sam, Mikaela, and Leo arrived at the shop pleading for Simmons' help, he refused, blaming Sam for the loss of his job, until Sam informed him on the symbols he was seeing in his head. That was when Simmons led the three to a bunker below the shop to reveal all of the files he kept following the shut-down of Sector Seven. Simmons revealed that those same symbols have been marked not only all around the world, but for the last millennium. He also showed several photographs of different vehicles that were most likely 'robots in disguise.' The captured Decepticon named Wheelie analyzed the photos at the insistence of Mikaela, and said these were Seekers, who were sent to Earth to look for some item unknown to him. Of the pictures of the Seekers, the closest to Simmons and the group was an old SR-71 Blackbird, located at the Smithsonian Air and Space Museum.

They went to the hangar to find it, after incapacitating a few guards and Simmons disguising himself as one, and used Sam's shard of the All Spark to reactivate it. Mikaela noticed the Decepticon symbol on it, and alerted the rest of the team, until the Blackbird revealed himself to be a grumpy, but non-hostile ex-Decepticon named Jetfire, who chose to switch sides years ago. Jetfire read the symbols Sam wrote down, and then teleported them to Egypt, where Jetfire revealed that the Matrix of Leadership is hidden within a tomb. Simmons, Sam, Mikaela, Leo and the Twins arrive at the nearest town (Narrowly avoiding the cops in the process), Simmons called in for Lennox to bring Optimus Prime's corpse to Egypt informing him that there is a chance to revive Optimus.

The group gets stopped at a checkpoint, but Simmons sweet talks his way out of it, claiming that Sam, Mikaela and Leo are his kids and that he's from New York. Luckily for him, the guard was a Yankee's fan. After spending the night in an abandoned building, and Sam discovered where the Tomb of the Primes is, Simmons went with them to find it and discovered the Matrix. However, when Sam picked it up, it turned into dust. While en route to meet up with Major Lennox, they are discovered and attacked by the Decepticon forces. Leo went into an emotional panic, annoying Simmons to the point of tasering him to shut him up. Simmons, in an effort to cover Sam and give him time to make it to Optimus, stayed. He, the Twins and Leo ended up facing Devastator. Simmons nearly got sucked into Devestator's turbine, but Leo saved him.

Devastator began digging it's way into the top of the Pyramid to uncover the Solar Harvester, until Simmons climbed the pyramid to set it up using a GPS device to get the coordinates once he was up there. He radioed for a rail gun strike from a nearby destroyer (Not before informing them of his location: right below Devastator's scrotum, of all places), which blasted Devastator to pieces, apparently killing him. Following the defeat of the Fallen and the destruction of the Solar Harvester, Simmons was praised by Major Lennox for his effort in saving the entire world.

After the battle in Egypt, Simmons wrote a book about his actions, sold it and became rich. He now has a personal assistant, "Dutch", a former NSA cyber-sleuth. Simmons has an interview with The O'Reilly Factor. The interview doesn't go well and Simmons kicks out the reporters. Afterwards, when he consults with Dutch about what he has next, he is surprised to learn that Sam is calling him and takes the call. Sam informs him that he's calling to get Simmons' help with figuring out the Decepticons' plans, so Simmons has the call encrypted. After hesitating about getting involved again, Simmons asks "what kind of secrets?". After learning that it has to do with the Apollo Program, Simmons instantly agrees to help, clears his schedule and heads to Sam's apartment.

Simmons meets with Sam, Wheelie and Brains, getting what Sam's fellow employee Jerry Wang was working on before he was murdered by Laserbeak. After determining that the Decepticons are probably hiding something on the Moon, not searching for something, Simmons gets annoyed with Bruce Brazos, Sam's boss who want to see the "robot", and kicks him out. When Sam's new girlfriend Carly shows up, she's annoyed with Simmons' presence. Simmons tries to have Dutch frisk her, but she refuses. After she storms out and leaves in her expensive car, Simmons comforts Sam and admires the car, saying he used to hate rich people before he became one of them.

After Brains locates two former Russian cosmonauts, Sam, Simmons, Bumblebee, Sideswipe and Dino head to Atlantic City to meet with them. Simmons, after he and Dutch arm themselves, tries to say "hello" in Russian but says "goodbye" instead. By using money, he gets them through the door and gets Dutch to try to find something in Russian to say to make him look tough, but the cosmonauts speak English and Simmons is annoyed with Dutch. The cosmonauts refuse to help and the people in the bar pull guns. This leads to a tense standoff, but Simmons defuses the situation and the cosmonauts decide to help. They show Simmons and Sam photos of the dark side of the moon revealing that the Decepticons have hundreds of space bridge pillars. Realizing that the Decepticons need Sentinel Prime for their plans, the group escorts him back to NEST, but are attacked by the Dreads along the way. Simmons is thrown out his limo during the chase and is injured.

Simmons breaks his leg, but survives and is brought to a base with Sam where he reunites with Charlotte Mearing, whom he had a previous sexual relationship with. Simmons is shocked when the Autobots are ordered from the planet and witnesses Sam's goodbye with Optimus Prime and Bumblebee before they leave in the Xantium. Simmons believes that one day when someone asks them where they were when the world ended, they'll have to say they watched it happen. After the Autobots are apparently killed and Dylan Gould calls Sam about what they learned from a spy-bot, Sam asks Simmons and Dutch to track Gould's call so he can find and rescue Carly.

While Sam is in Chicago, Simmons brings his actions to the attention of Mearing and NEST and tries to help get a UAV in to reconnaissance Chicago. He watches Sam and Carly's broadcast through the shot-down UAV. Simmons suggests using traffic cameras and ATM cameras to get a look at what's going on and gets success through a camera on a bridge. Knowing NEST needs to get across, Simmons has Dutch lower the bridge and asks Mearing for thanks. Instead she thanks Dutch.

When the battle is won, Simmons swoops Mearing off her feet and kisses her. She laughs initially, but then orders him arrested. Simmons is so happy that he doesn't care, saying he's willing to go to jail for love.

Following the hunting of the Transformers by the TRF, Simmons had been relocated to Cuba (which seemed to be a safe haven for Transformers). He shared a living with the two Wreckers, Roadbuster and Topspin, who liked to pester him to go to the beach with them. He informed Sir Edmund Burton about important information about the alien horns appearing worldwide and told the British lord about the significnce of Stonehenge, allowing Burton to lead the Autobots there for the final battle. 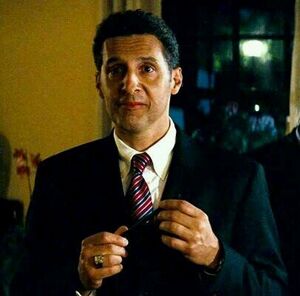 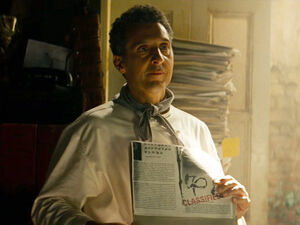 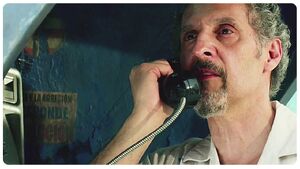 Simmons in The Last Knight 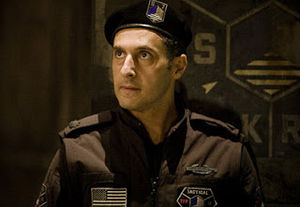 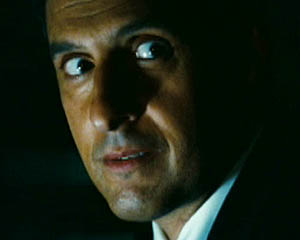 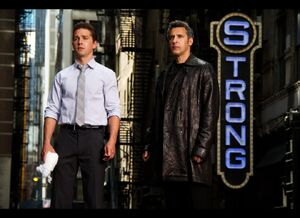 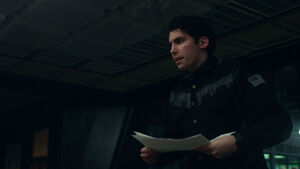