Soldier in the Army (formerly)

Walter Seymour Skinner (formerly known as Armin Tamzarian) is the principal of Springfield Elementary School and a supporting character in The Simpsons.

He is one of Bart Simpson's enemies or ally. He is Agnes' son, who always scolds him, often considering a wimp.

He is voiced by Harry Shearer and by James Capbell when he sings.

There are occasion when Skinner took the role as a minor antagonist, the perfect case would be when the entire school was snowed in and instead of trying to escape he forces the children to wait for the authorities to reach them and began acting like an army general such as punishing any student who tried to dis behave by hanging their scruffs form a coat hanger.

Skinner is easily angered by Bart and Nelson but he is also mad towards Dolph, Kearney and Jimbo.

Skinner differed a lot from before the series. For example he was called Armin Tamzarian, an orphan and ner-do-ell who had no respect for anyone such as mugging an old lady then later ramming into a judge with his motorcycle. He was even willing to fight in the army rather than apologise to the woman he mugged, although at the time he had no idea a war was going on. However Skinner quickly matured after being inspired by his army sergeant, Seymour Skinner and was left heartbroken when he was killed by a bomb strike and even decided to break the news to Agnes that her son had died however he bring it up to himself the break her heart and pretended to be her son, and fulfil Sergeant Skinner's dreams of being a high school principal, a lie which he held for nearly twenty years.

Skinner was a strict disciplinarian who was always tough on truants despite this he has been stuck with what has been called the worst school in the state, and has to put up with extremely unruly students, disrespect and pranks. The trickster he constantly butts heads with Bart Simpson, his archenemy who goes out of his way to make sure that Skinner's life was miserable such as setting up Bart to prank Groundskeeper Willie at "Scotchtoberfest' and purposefully get him three months, this resentment also shared with Bart who, when getting wind of Skinner's deathly peanut allergy and used this to control him. However there are occasions when they are close friends, such was the case when Santa's Little Helper got Skinner fired from his job and it's revealed that they can actually be quite close, and if weren't for Bart's disrespect towards authority figure and Skinner's despised attitude towards troublemakers, they would have been friends in another life but they are actually needing each other as enemies more as friends. In any case when they are friends they act very close to a couple, like taking a stroll across the beach, a dinner for two and even friendly chatting each other up.

Behind this pompous demeanor, Skinner was a tortured soul. He was severely traumatized by what he had seen in the army and the Vietnam War, he occasionally shows his Survivors Guilt however this is normally at the most inept times and whenever he does, Skinner becomes dark and melancholy however he quickly reverts back to his normal emotional state when he shakes this off. Skinner's trauma is often shown whenever he experiences flashbacks, such as his time in a POW camp after one of his friends tried to escape a prison but ended up being eaten by an elephant guard, his comrade Johnny dying before his eyes while sending Valentine cards and his mentor Sergeant Skinner from an air strike. 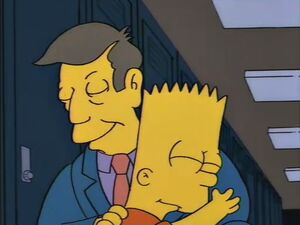 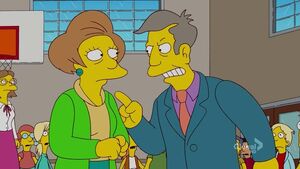 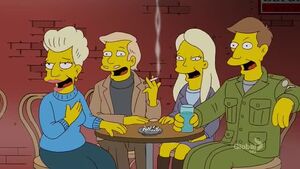 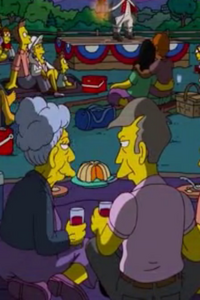 Seymour with his mother Agnes 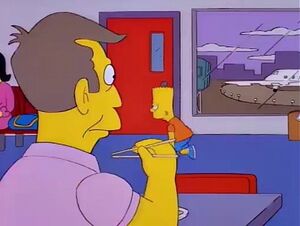 Principal Skinner with Groundskeeper Willie and children, trapped in school

Retrieved from "https://hero.fandom.com/wiki/Seymour_Skinner?oldid=1735212"
Community content is available under CC-BY-SA unless otherwise noted.