Immense Power In the force

To save the Republic from the Separatists.

Shaak Ti was a female Togruta Jedi Mistress, hailing from the planet Shili, serving the Galactic Republic as a member of the Jedi Order in the final decades of the Republic era.

She was portrayed by Orli Shoshan in Attack of the Clones and Revenge of the Sith.

Joining the Jedi High Council  in the years before the Clone Wars, she took up the ranks of General within the Grand Army of the Republic and was tasked with the oversight of clone trooper training on the ocean world Kamino.

As a Jedi Councilor, Mistress Shaak Ti was involved in many epic conflicts during the Clone Wars, including planning and engaging in the opening Battle of Geonosis on Geonosis. In addition, Mistress Ti was instrumental in the First and Third Battles of Kamino, where she helped to protect the future generations of clone troopers growing at the facilities, as well as during the Battle of Hypori where she became one of the few Jedi to survive an encounter with Artel Darc, before which she served with distinction during the conflict on Brentaal IV.

Shaak Ti was assigned to protect the Jedi Temple in the final days of the war as the threat of the hidden Dark Lord of the Sith became clear. Stationed there during the initiation of Operation: Knightfall, Ti escaped with her life when the Temple and the Republic fell into the hands of the Sith Lords. Fleeing Coruscant and traveling from world to world, Ti finally landing on Felucia with the orphaned Padawan Maris Brood. Once on Felucia, Shaak Ti trained Brood and the local Force-sensitive Jungle Felucians for an inevitable confrontation with the Sith. Mistress Ti was eventually tracked by Darth Vader who sent his secret Sith apprentice, Galen Marek to kill her. Starkiller and Shaak Ti engaged in a vicious duel, ending when an injured Ti toppled into the  Ancient Abyss.

Shaak Ti is the beautiful Jedi Mistress. She is also wise, kind, agile, smart, loving, motherly, and compassionate. According to Mace Windu, she is "as beautiful as a flower, yet as deadly as viper".

A powerful and experienced Jedi Master, Shaak Ti was an immensely skilled and formidable duelist, her skill being considered equal even to the like of Count Dooku. Shaak Ti is shown as an aggressive fighter, being a master of both Makashi, the fencer's form, and Ataru, the aggresive form. In Legends, nearly twenty years after the clone wars, her skill had greatly increased with age, as when facing Galen Marek, Vader's secret Sith apprentice, she fought him as an equal and even began to gain the upper hand, only barely losing at the end.

As a Jedi Mistress, she wears a dress consisting of both a floor-length dark crimson skirt and long-sleeved black shirt with lower-cut neckline that shows her breast cleavage. Beneath her skirt are her dark sienna trousers. She wears a thin sienna scarf with circle print that should extend down to about knee-length. She also sports a brown leather belt with gold rectangle buckle and a calf-length leather sash with orange and silver designs that hangs down her belt. She also dons a brown Jedi robe with a hood that she never puts on her head and matching Jedi boots. (But in Star Wars: Clone Wars it looked like she was always barefoot)

As Chieftain after she sneaked away from the Great Jedi Purge to Felucia, she wears a cream backless top with a deep V-front (that shows both her bare back and shoulders) and brown straps around her midriff that seem to accentuate her breasts and bellybutton. She has both a tan loincloth (which only covers her groin) and homemade briefs. She also sports a bit of gray cloth wrapped around her feet (that shows both her bare toes and heels) and most of it around both leg calves (that shows her right knee) and left forearm (with a couple silver spikes on it). Brown straps she's tied around her lekku and montrals are long enough that they almost reach the ground behind her. She carries white stripes of war paint marked on both her bare arms and thighs and silver toenails with each black line on one when goes half barefoot. She also dons a white tooth necklace, silver chains around her waist, 3 gold thin bracelets on her right wrist, and silver armband on her upper right arm. 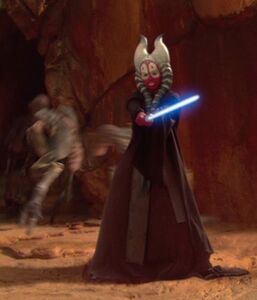 Shaak Ti in Attack of the Clones at the Battle of Geonosis. 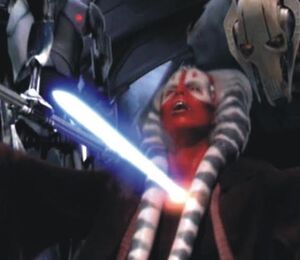 Shaak Ti's non-canon death in a Revenge of the Sith deleted scene. 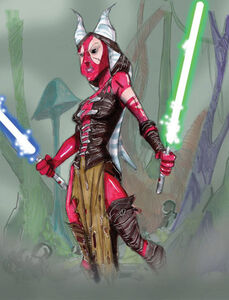 Shaak Ti in The Force Unleashed. 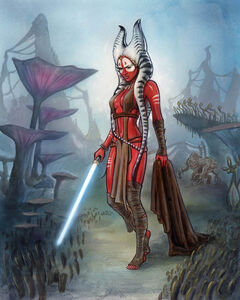 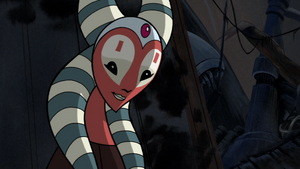 Shaak Ti as appeared in the Clone Wars 2D cartoon. 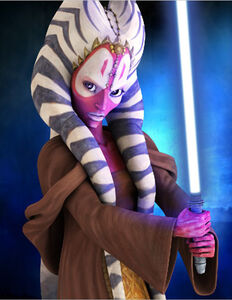 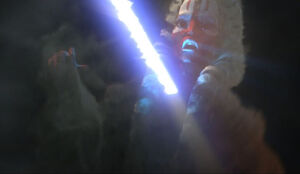 Shaak Ti killed by Anakin Skywalker in a Force vision seen by Yoda. 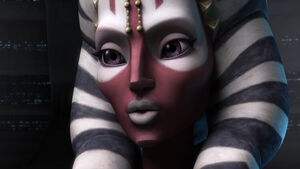 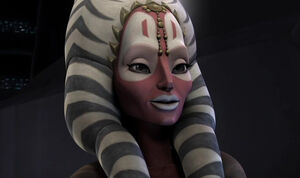 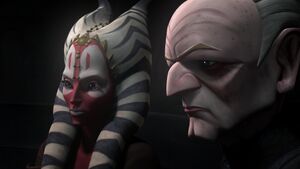 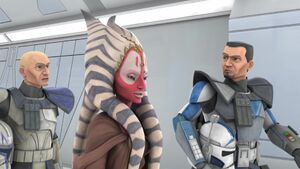 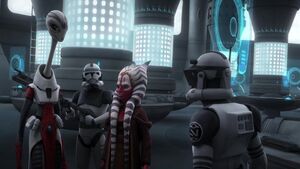 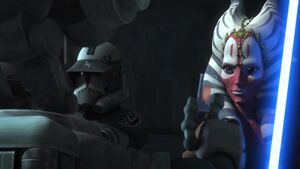 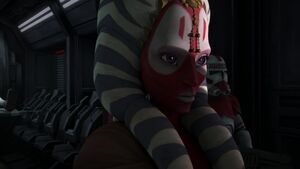 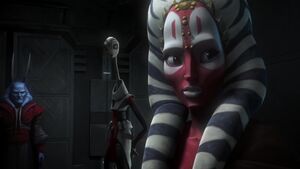 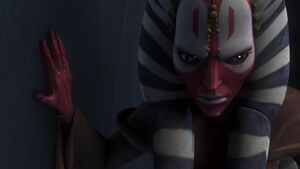