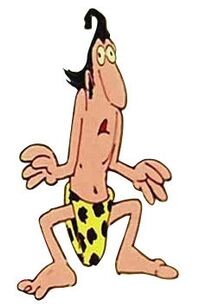 Shame (aka Tarzoon) is the main character, from the animatied film - Tarzoon: Shame In the Jungle (1975). Parody to Tarzan, Created by Picha.

As he swings through the jungle, a airplane crashes in a giant mud pit, containing a crew of four explorers set out to find Shame. As the crew wander through the jungle, they eventually find Shame, but before they can get acquainted, Brutish and Short step in to take Shame back to the plane, leaving the Professor to be eaten alive by savage monkeys known as "Molar Men" while Stella is tied up to a tree. The Molar Men catch up with Brutish and Short and eat them both. They free Shame from the cage, but only to try and eat him. He gets saved by a beer-guzzling frat boy named Craig Baker, who flies on a carpet run by a flock of birds. After a lengthy conversation with Shame, Craig gets drunk and falls off the carpet. Shame also falls off, but is saved by Flicka.

Shame and Flicka eventually make it to Bazonga's lair. Flicka is told to stay behind while Shame go gets June. Unfortunately, he's caught Bazonga's soldiers while they were on a practice drill. Shame is taken to Bazonga, who tries to convince the former to join her side and rule the world with her. Shame says he only wants June, which enrages Bazonga. He runs off to find June, who is about to receive the scalp transplant from the bickering Charles Of The Pits. Bazonga's soldiers try to stop Shame, which results in the blimp moving and main generator exploding, which sends the place on fire. Bazonga can't escape from the fire in her office. Shame sees this and saves her by igniting the Emergency Fire Alarm, which sends out more of Bazonga's soldiers to cover themselves in condoms and dive inside Bazonga's vagina until she explodes.

Shame eventually finds June, who keeps bickering to Shame while they find a way to escape the blimp, as it drills its way out of the cave and flies all around the jungle. The two find an emergency two-seated parachute, and spring out of the blimp, which finally crashes onto Bazonga's cave, destroying it forever. As June kisses Shame for his bravery, they both spot Stella Starlet, who becomes the leader of the Molar Men, and plans to conquer Hollywood.