Lt. Shane Wolfe is the main protagonist of Disney's 2005 comedy The Pacifier.

He is a Navy SEAL Lieutenant whose job is to protect the family of a deceased professor while the latter's widow, Julie, is escorted by Shane's commanding officer Captain Bill Fawcett to Zurich, where the family's safety deposit box has been discovered.

Things aren't much better at school. While Principal Claire Fletcher allows him to be there to protect the kids, Vice Principal Jerk Ass Dwayne Murney — who actively dislikes Seth, particularly when he quits the wrestling team — is a totally different matter. As Shane tries to deal with him and come to some sort of agreeable arrangement with the kids, he tries to find the missing satellite program, all while dealing with a pair of masked ninjas who are looking for the same.

They get word that their mother cannot get the box until she can supply the correct password, so she ends up staying for a lot longer. As time goes on, Shane finds himself warming up to the kids, and the feelings are eventually reciprocated. In the end, Shane becomes a surrogate father to the kids, and, with their help, he saves their father's research from falling into enemy hands.

He was played by Vin Diesel who also played Dom Toretto of the Fast & Furious franchise, voiced The Iron Giant from the film of the same name and Groot from Guardians of the Galaxy film series.

U.S. Navy SEAL Lieutenant Shane Wolfe is assigned to rescue Professor Howard Plummer, a man working on a top-secret government project from a group of Serbian rebels. Wolfe and his team manage to get Plummer off an enemy boat; moments later, Shane and Plummer are shot while boarding the escape helicopter, leaving Plummer dead and Wolfe spending two months in the hospital. Shane's commanding officer, Captain Bill Fawcett, is assigned to escort Plummer's widow, Julie, to Zürich, where a safety deposit box belonging to the Plummers has been discovered. Wolfe is assigned to stay at the Plummer residence, in Bethesda, Maryland to search for the secret project called GHOST (Guided High Altitude Scrambling Transmitter), hidden somewhere in the house, and to look after the family's five children: Zoe, Seth, Lulu, Peter, and Baby Tyler.

The kids prove to be difficult to handle, even with the help of nanny Helga: Zoe and Seth rebel against Wolfe's authority; Lulu is obsessed with the new houseguest; the pet duck, Gary, resents Wolfe; and Helga finally quits when one of Zoe and Seth's pranks go wrong that was intended for Shane. While Shane tries unsuccessfully to prevent Helga from leaving, he gets a phone call from Julie that she and Bill have to stay at Zürich for a few more days because they could not unlock the box, which requires a password. Later, Shane finds Lulu and her troupe of Fireflies at the kitchen table. Shane takes them to Costco and while he does the shopping the troupe tries to sell cookies outside the store. However, things go horribly wrong when a group of obnoxious rival boy scouts come over and wreck their stall. When they finally reach home, they encounter an unexpected house party hosted by Zoe and her boyfriend, Scott. Wolfe forces all the guests to clean up the house before going home. Feeling that Wolfe does not care about the fact that the kids are still grieving over the death of their father, Zoe yells at him, right before they are then suddenly attacked by a pair of masked ninjas, whom Shane eventually defeats. He explains the entire situation to the kids, who agree to cooperate with him.

A few days later, the school's vice principal, Dwayne Murney, informs Wolfe that Seth has cut and bleached his hair for no apparent reason, has a Nazi armband in his locker, and has skipped every wrestling practice for the past month, to Wolfe's attention. At home, Seth furiously yells that he only joined the wrestling team in obedience to his father's wish. He sneaks out of the house, tricking the alarm system with a refrigerator magnet. Wolfe, leaving Zoe in charge, follows him to the town theater, where he learns that Seth has secretly joined an amateur production of The Sound of Music. The director quits when he believes the show will be a failure, whereupon Wolfe volunteers to take his place, and juggles this task with taking care of the house, giving Zoe driving lessons, and teaching Lulu and the Firefly Scouts martial arts to defend themselves against the rival boy scout troop.

Later, Seth quits the wrestling team at Wolfe's prompting, confessing that he is in The Sound of Music after Murney catches him under the bleachers, practicing his dancing. When Murney threatens the boy, Wolfe challenges him to a wrestling match in front of the entire school. Despite Murney's show of bluster, Wolfe easily wins. The training Wolfe gives the Firefly Scouts becomes useful when they once again have a conflict with the thuggish scouts. The girls beat and tie up the boys, refusing to let them go until the thugs agree to stop bothering them.

Shane and Zoe share stories of their fathers, both of whom have died in similar circumstances. They are interrupted by a phone call from Julie, who has figured out the password ("My Angel"), retrieved the item in a box (a special key), and is on her way home. The kids immediately begin to plan a 'Welcome Home' party. Less than an hour later, Shane discovers a secret vault underneath the garage, which requires a two pronged key to open. When Fawcett and Julie arrive home, Shane and Fawcett go to the garage, where Wolfe says he is rethinking his career. The two ninjas seen earlier arrive armed, and pull off their masks, revealing themselves as the Plummers' North Korean neighbors, the Chuns. Fawcett suddenly knocks out Shane, proving that he is in fact a double agent. They tie up and gag Zoe, Seth, and Lulu, place Peter and Tyler in the playpen, and Fawcett and Mrs. Chun take Julie to the vault while Mr. Chun looks after the children. They manage to open the door, but the dangerous security system prevents them from going any farther.

The children, all tied up tightly and gagged with cloths, managed to escape after untying themselves by taking down Mr. Chun through their teamwork. They awaken Wolfe, who goes to the vault to help Julie, sending the kids to summon the police. Mr. Chun follows them in his car; with Zoe at the wheel, the kids force him to crash. Wolfe figures out how to get past the security system, using a dance ("The Peter Panda Dance") Howard made up to make Peter go to sleep each night, to avoid its traps. He, Julie, Fawcett, and Mrs. Chun engage in combat, and end the fight when Julie knocks out Mrs. Chun. After a brief struggle, Fawcett aims his pistol at Shane, requesting for any last words. Shane responds "Say goodnight, Peter Panda" and his voice activates the final vault, knocking out Fawcett with the door, unconscious. Shane and Julie look inside the vault and find a small chip—the GHOST program itself!

By then, the children have lured a large crowd of police to the house. Mr. Chun, however, holds all of them at gunpoint. Shane notices school principal and love interest Claire Fletcher right behind him, having followed the chase when she saw it pass by the school. Wolfe, aided by Gary the duck, distracts Mr. Chun, whereupon Claire knocks him unconscious.

With their missions accomplished and Fawcett and the Chuns arrested, Shane and the Plummers say their goodbyes, and Shane and Claire share a kiss. The family attends Seth's performance, where we learn that Wolfe has retired from the Navy and joined the school staff as the new wrestling coach. Murney is shown briefly on stage, where he is singing "Climb Ev'ry Mountain" off-key while dressed in a nun's habit, as the film concludes. 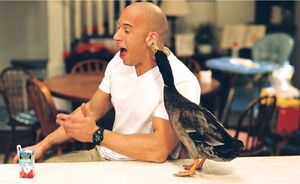 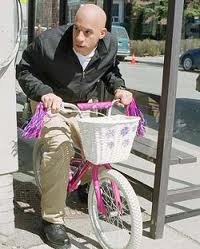 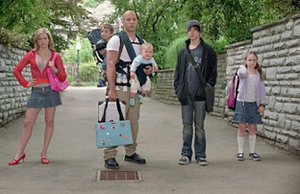