Shang-Chi (The Rising and Advancing of a Spirit)

Shang-Chi, also known as the Master of Kung Fu, Brother Hand and Deadly Hand, is a fictional character and superhero from Marvel comics, and the character originally came from Sax Rohmer's licensed property as the unnamed son of Fu Manchu.

He is the son of Zheng Zu (before Fu Manchu), a villains crime lord and sorcerer who trained his son to become an assassin. Even though Shang-Chi is the son of one of the most infamous criminals in China's history (Fu Manchu), he uses the skills and teachings his father taught him to fight crime instead of committing crimes. He is a member of the Five Weapons Society, House Champions, and the Protectors, and a former member of the Avengers, Marvel Knights, Heroes for Hire, Underground, and A.I.M.'s New Avengers. Likewise he was part of the Heroes for Hire, then also became one of Earth's Mightiest Heroes in Jonathan Hickman's Avengers.

He was created by Steve Englehart and Jim Starlin, and first appeared in Special Marvel Edition #15 in December of 1973.

Originally, he was the renegade son of the infamous Fu Manchu, a Chinese crime lord, and was constantly pulled into adventures against his will (which he frequently referred to as "games of deceit and death").

Shang-Chi is the son of Zheng Zu and Jiang Li, and is the brother of Zheng Shi-Hua, and half-brother of Zheng Bao Yu (before Fah Lo Suee), Kwai Far, Esme, Moving Shadow, Brother Staff, and Takeshi. Shang's father was a infamous crime lord and sorcerer who went by the name "Fu Manchu", and was trained at an early age to become a deadly assassin.

However, Shang saw his father's villainous nature and defected, and started to attack his father's empire to destroy it. Shang then allied with Denis Naylande Smith, the archenemy of Zheng Zu, and the British agency MI6. While fighting off his father's assassins and helping MI6, Shang-Chi started to travel across the world, and met other martial artists and superheroes.

He became the rival of Cat, and allied with Iron Fist, Jack of Hearts, and White Tiger to defeat the Corporation. After assisting MI6 against Si-Fan ninjas, Shang-Chi was recruited into Marvel Knights, a team led by Daredevil to stop the Punisher. Additionally, the Marvel Knights would fight other threats, but would later disband.

Shang-Chi then joined the Heroes for Hire, a team led by Misty Knight and Colleen Wing after the Superman Registration Act was signed. On the team, Shang-Chi was teamed up with Tarantula, who he started to develop romantic feelings for, but couldn't act on them due to her violent nature.

While part of the Heroes for Hire, Shang started to loose his center, and realized this when he murdered his teammate Humbug, whom was connected to the hive. He left the team to regain his center, and later became an ally of Captain and the Secret Avengers.

Shang-Chi would then become a member of the Avengers, having been first chosen by Captain America after the events of "Avengers vs. X-Men". One of his first missions was to help Captain America plan a counterattack against Aleph on Mars, and Shang succeed in damaging one of the legs of the robot. Shang would then work with Black Widow, Spider-Woman, and Manifold in rescuing the Avengers when they fighting against the Builders.

Afterward, Shang-Chi and Wolverine were sent to Madripoor, and Shang used Pym Particles to fight against a dragon that was awakened by Gorgon and the Hand. 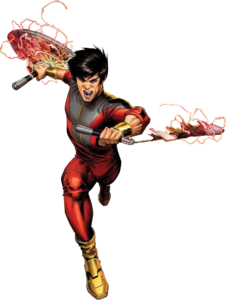 Shang-Chi in the comics. 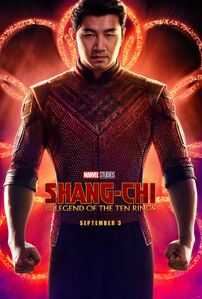 Simu Liu as Shang-Chi in the titular MCU film, Shang-Chi and the Legend of the Ten Rings. 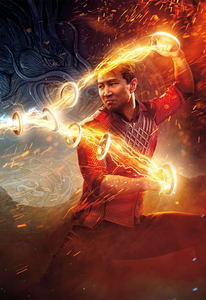