Shank is the tritagonist of Ralph Breaks the Internet. She is a tough-as-nails netizen from an online racing game called Slaughter Race.

Shank is voiced by the Israeli voice actress Gal Gadot, who also portrays Wonder Woman in the DC Extended Universe.

Shank comes from an extremely intense and gritty online racing game, where she serves as a non-playable boss. She is accompanied by her crew of followers (Butcher Boy, Felony, Pyro and Little Debbie) who assist her in-game.

Shank is first shown with her intimidating gang members getting the drop on two players about to steal her car and promptly orders Pyro to kill them. Afterwards, she gets into a mild disagreement with Pyro and Felony about how hard they may be going on the gamers, but she expresses her opinion in a non-threatening manner. When Vanellope and Ralph attempt to steal her car, Shank manages to keep up while showing her impressive driving skills. And even though she has every right to be mad at the duo, she immediately helps them on their quest. This establishes her as a ruthless in-game leader, as well as an genuinely decent person off-game.

Shank is a tan-skinned woman with sharply-defined features. Her hair is a dark shade of brown while her eyes are of a lighter shade. Her long hair sometimes covers the large ringed earrings that she wears. She wears a black leather jacket, that sits on top of her red hoodie and blue shirt. 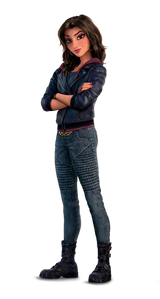 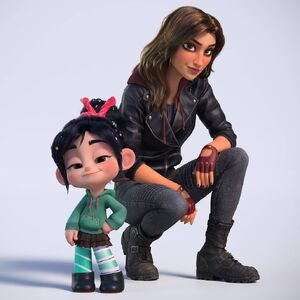 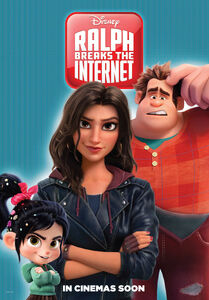 Shank and Vanellope, discussing about the latter's decision to stay in Slaughter Race