Shannon is a heroine from Umineko no Naku Koro ni. Also known by her real name Sayo, she is a maidservant working on Rokkenjima.

Despite being an extremely talented and hardworking servant, Shannon has a habit of making mistakes and blunders when she is nervous. She thinks of Kanon as her younger brother and like him, she feels she is inferior to humans, as she is only furniture. Despite this, she has fallen in love with George. Later, Shannon is shown to have the power to summon a large protective shield with arrows rotating around it. Her main story revolves around her love and engagement to George and her connection to Yasu, being the person Yasu wanted to be the most in his/her childhood.

Shannon is a playable character in Ougon Musou Kyoku. She is voiced by Rie Kagiyama.

Shannon appears as a young woman with short brown hair and blue eyes and is also very curvy. She wears a white beret cap with a maid outfit. She wears the Ushiromiya crest on her left thigh. 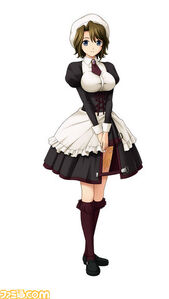 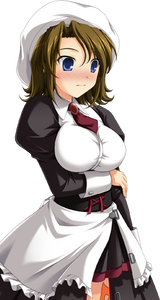 Ougon Musou Kyoku
Add a photo to this gallery

Retrieved from "https://hero.fandom.com/wiki/Shannon?oldid=1773252"
Community content is available under CC-BY-SA unless otherwise noted.