Shantae is a half genie hero and the titular main protagonist of a game series of the same name from WayForward. Shantae recieved her magic from her mother (who is a genie), and she protects her friends and Scuttle Town from her arch-nemesis, Risky Boots.

She is voiced by Cristina Vee, who also voices her archenemy, Risky Boots.

Shantae is a olive/tan-skinned young girl with blue eyes and pointy ears of which hang some gold earrings. Her hair is long growing purple hair tied back in a ponytail stem stalk, which also serves as a whip. Her clothes consist of a red bra and harem pants of the same tone, she also has golden wristbands, a tiara on her forehead and a purple collar on her neck.

The story of the game focuses on a half-genie named Shantae. Her job is being the Guardian Genie of a small fishing town known as Scuttle Town, and her life is quite quiet. This changes at the beginning of the game when a group of pirates, led by the sinister Risky Boots, attacks the town and steals a prototype steam engine in the Mimic Treasure Hunter Workshop. Shantae quickly finds herself travelling through Sequin Land, determined to recover the steam engine and thwart Risky's evil plans.

Things are calm in Scuttle Town since the clash between Shantae and the pirate Risky Boots. During the annual exhibition of the treasure hunters, Shantae and her friends visit Uncle Mimic revealing his latest discovery: a common-looking lamp enclosed in stone. As they begin to wonder about what it is, the notorious pirate, Risky Boots, destroys the exhibition and steals the lamp. During the swift battle that follows, Shantae is knocked out and the vengeful pirate escapes at time. Blaming the half-genie for the confusion in the city and her efforts in vain to do her job, the mayor of Scuttle town casts Shantae of her work as guardian of Scuttle Town.

Although no longer a guardian genius, Shantae decides it is her responsibility to stop the new plan of Risky Boots.

Shantae and the Pirate's Curse

After the events of Shantae: Risky's revenge, during which Shantae had to destroy the personification of her powers, she had to adapt to a life without her genie's powers. But one day, the city of Scuttle town is attacked by the new mayor of the city, Ammo Baron, Shantae has no other choice than fight depending on her long hair as her only main weapon of defense. On the same day after the battle, Shantae is visited by her nemesis, Risky Boots who traps her to ask where her weapons and her crew went which Shantae does not know and is forcibly dragged by Risky into the Mimic Workshop. In front of her, Shantae sees a tinkerbeat, one of the servers of Risky, and she did not know why her uncle had locked him in a capsule, at that very moment a black powder seizes the Tinkerbat transforming it into a monster and releasing itself breaking the glass, Shantae fights it and then Risky gives her a magical lamp to her to suck the black powder, then risky realizes the situation and informs her that her genie magic was broken in twenty fragments. These fragments have merged with the Tinkerbats and now they want to resurrect Risky's old mentor, the Pirate Master, which would mean the end of Sequin Land.

After having an agreement, Shantae could recover her magic and Risky her weapons and her crew of Tinkerbeats, the two enemies form a fragile alliance to recover the fragments of magic and to prevent the resurrection of the Pirate Master. Without her genie's powers, Shantae must learn to be a pirate to finish her adventure and save Scuttle Town.

The newest addition to the Shantae game series, happens to be a Kickstarter-funded game as well well as a big redesign to the series. Shantae now has an art style similar of that of Mr. Driller and Panty & Stocking. Just like the game's spiritual successor, Mighty Switch Force.

Shantae's half-genie nature gives her several magic abilities such as: 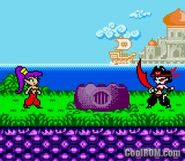 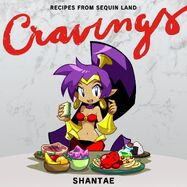 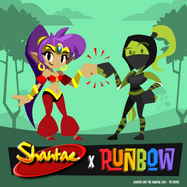 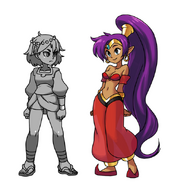 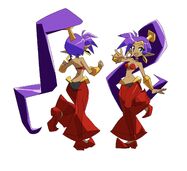 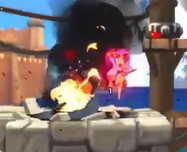 Retrieved from "https://hero.fandom.com/wiki/Shantae?oldid=1692918"
Community content is available under CC-BY-SA unless otherwise noted.