Medic in the Colony 6 Defence Force

Rescue Juju from Xord, Rebuild Colony 6, Defeat the Mechon and Zanza (all succeeded)

Military Healer
Sharla is one of the main protagonists and playable characters of the video game Xenoblade Chronicles. She is a medic in the Colony 6 Defence Force, who uses an ether rifle in combat, and the prominent healer for the group.

She is voiced by Akeno Watanabe in the Japanese version and Kellie Bright in the English version.

Sharla is a somewhat tall woman in her early twenties with a slightly dark skin complexion and a slender build. She has long black hair that she usually wears a cap over and brown eyes. Like all playable characters, her outfit depends on whatever the player equips to her.

Sharla is a very compassionate young woman who can't stand to see people get hurt, which is why she became a medic. She feels sorry for Dunban due to the loss of his right arm as the result of wielding the Monado, believing it to be an unfair reward for the person who thwarted the Mechon invasion one year prior. She becomes fast friends with both Shulk and Reyn, particularly the latter due to his similarities to Gadolt. She has a very maternal nature and is considered the 'mother' of the group by several characters, even Riki, who is nearly twice her age and is married with multiple children.

Despite this kind nature, Sharla can also be quite violent at times; she slaps Juju for running off on his own, which results in him falling into Mechon hands twice. Additionally, when Xord reveals to have devoured all her comrades, Sharla shows a vengeful side, saying she won't stop until she's "scrapped each and every one of [the Mechon]".

Sharla loves fruit, as evident by the fact that all of her favourite presents are fruit, and there's even an achievement for giving her 20 of them. She also hates bugs and gets really uncomfortable when Dunban shows her a bug that he got from Fiora as a present.

Sharla is a trophy in Super Smash Bros. for Wii U.

In Super Smash Bros. Ultimate, Sharla is a advanced-ranked support spirit that equip the fighter a ray gun. Her spirit battle is against Zero Suit Samus who starts with a ray gun with increased power of shooting items on gaur plain. 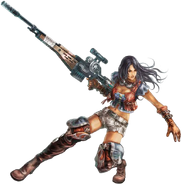