Keep Stan and his friends from watching Terrence and Phillip (formerly).
Help Sheila and the parents censor all "naughty words" from children by executing the Canadian comedians, Terrence and Phillip, and go to war with Canada to prevent any more of their content from corrupting America (South Park: Bigger, Longer, and Uncut; formerly).

Parent
Sharon Marsh is Jimbo Kern's sister, Stan and Shelly Marsh's mother, Marvin Marsh's daughter in-law, and Randy Marsh's wife of South Park. She is a housewife and a receptionist of Tom's Rhinoplasty.

Sharon's outfit slightly resembles that of Stan's, except with a few slight variations. She wears a brown sweater with red frilly ruffles on the cuffs and the collar, and dark blue jeans. Her hair is brown and seems to be slightly wavy. Some characters find her attractive, especially for her cleavage. This is first made evident in "Lil' Crime Stoppers". Butters, asked by the boys to provide a semen sample for a case, is unable to produce one throughout the episode. At the end of the episode, he was finally able to produce one after he imagined Sharon's breasts. Later, in "Pre-School", The 6th Graders agree to protect the boys from Trent Boyett in exchange for a photo of Sharon's breasts, telling Stan, "Your mom has the hottest boobs!"

Sharon was portrayed in earlier seasons as a loving but stern suburban mother. She wanted to protect Stan from the 'dirty' language and vulgar humor of his favorite cartoon, Terrance and Phillip, in "Death" and South Park: Bigger, Longer & Uncut. In "Spookyfish", she was so protective that she buried the bodies of people she thought Stan had killed, in order to prevent Stan from being charged with murder. In actuality, it was his new pet goldfish that murdered the people, to which Sharon felt regretful for not realizing in the first place. She was also unofficially in charge of the movement against Chinpokomon dolls in "Chinpokomon". However, she has often been caught up in fads around town, such as holistic medicine in "Cherokee Hair Tampons" and atheism in "Red Hot Catholic Love". 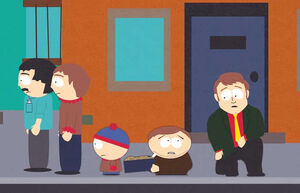 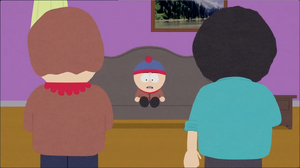 Stan Marsh gets punished by his parents for spending $489 on the Terrance and Phillip mobile game. 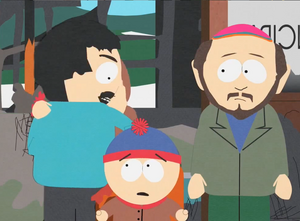 Randy Marsh prepping to disown Stan Marsh by kicking him out of the Marsh family after he was caught smoking and setting the school on fire. 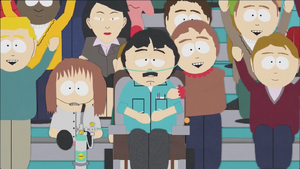 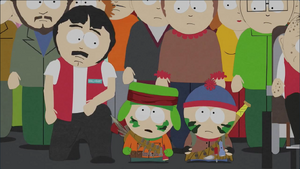 I'm sure glad you Boys got rid of that Wall-Mart store. I don't know why that store won't stay out of my head because of those incredible bargains, low prices and everything. Not to mention it has all the jobs for every South Parkians. And it's cutting every Civies jobs (Including my Job as a Geologist). But anyway (yes) I'm very proud of you Boys again (Especially you, Stanley).
Add a photo to this gallery

Retrieved from "https://hero.fandom.com/wiki/Sharon_Marsh?oldid=2199554"
Community content is available under CC-BY-SA unless otherwise noted.