Shatterstar is a supporting protagonist in the movie Deadpool 2. He is a member of X-Force from Mojoverse. He was played by Lewis Tan.

Shatterstar claims to be an extraterritivial super creature from the alien planet Mojoworld. He appears as one of the main members of X-Force, who successfully goes through the interview stage with Deadpool and Weasel, when he tells them about his alien abilities, claiming that he is Deadpool, that he is "him, but better", which irritated Wade ' and. After reviewing the Russell rescue plan, he is then seen aboard the transport aircraft together with the rest of the X-Force. Although Peter warns the team against strong winds that can affect the drop, Wade ignores him and the team jumps off the plane. It seems that everything goes well until the wind does not stray from the tour of all the band members, except for Wade and Domino. Shatterstar dies when he falls into the rotating blades of the helicopter, and his green foreign blood spills over the helicopter.

Shatterstar is quite arrogant when he declares that he is better than humans due to his alien physiology. He also appears to be very enthusiastic about his job as he's seen cheering on the plane as they approach the convoy. 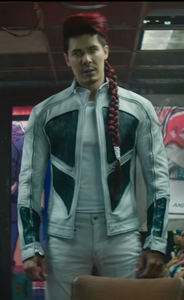 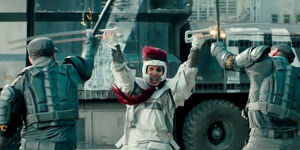