Traitor
The Templar Hunting Dog (both by the Assassins)Cabbage Farmer

Member of the Colonial Rite of the Templar Order

Captain of the Morrigan
Assassin of the Colonial Brotherhood (formerly)

Hunting and killing Assassins.
Browsing the sea on the Morrigan.

He was a member of the Templar Order, operating around the Atlantic Ocean during the Seven Years' War. Formerly a member of the Assassin Brotherhood, Shay devoted his Templar career to hunting down his old associates after the Lisbon incident. Aboard his ship, the Morrigan, Shay's travels brought him to New York and the Appalachian Mountains, among other locations to stop his former mentor Achilles Davenport.

Unlike many other Templars in the franchise, who did heroic things for evil reasons, Shay was generally more heroic than a typical Templar, as an anti-villain; either way, his motives for doing villainous things for good reasons, make him not as evil as this wiki would lead you to suggest.

He was voiced by Steven Piovesan.

Shay Patrick Cormac was born on September 12th, 1731 in New York to unnamed family, his mother died from childbirth and his father worked in the merchant marine. Shay was raised by his aunt since his father was absent for most of his youth, and became friends with Liam O'Brien. Once he reached the right age, Shay joined his father at sea and was trained in the use of swords, guns, and rifles. In 1747, Shay's father was killed when they encountered a storm, leaving him heartbroken and isolated while wandering the streets of New York.

Shay would reunite with Liam while fighting in taverns, and was introduced to the Colonial Brotherhood mentor Achilles Davenport. Shay was inducted into the brotherhood after a year, he devoted himself to the creed, but pondered the morality of the assassins and Achilles' control.

In 1752, Shay and Liam met fellow assassin Louis-Joseph Gaultier, Chevalier de la Vérendrye and even fought the latter when Cormac came off as ambitious and cocky. Despite this, Shay would assist the assassins in eliminating the Royal Navy who had intercepted smugglers that Louis-Joseph was suppose to meet in the North Atlantic. Shay managed to take over a ship named the Morrigan, and decided to become the captain and allowed Liam to be his first mate. Afterward, Shay and Liam returned to Davenport's homestead to inform their mentor, who was speaking with Caribbean Brotherhood member Adéwalé. While waiting for Achilles to finish his discussion with Adéwalé, Shay was further trained by Liam and fellow assassins, Hope Jensen and Kesegowaase. After receiving his training in firearms, hunting, and using the hidden blade, Shay was tasked with collecting the precursor box and the manuscript from the Templars.

Shay traveled to meet with Louis-Joseph and Le Chasseur, who sent him to Mount Vernon to eliminate the Templar Lawrence Washington, and felt remorse in doing so since Lawrence was already ill with tuberculosis. Before eliminating Washington, Shay saw the Templar speak with Samuel Smith, James Wardrop, and Jack Weeks, and overheard him give the box and manuscript to Smith and Wardrop to protect. Shay succeeded in tracking down Samuel Smith at sea, and assassinated him at Terra Nova to recover the precursor artifact and later eliminate Wardrop to receive the manuscript. Shay then worked with Hope to get help from the inventor Benjamin Franklin, who used his lighting rods to charge the box to project a holographic display of the globe with the precursors. Seeing one of the temples in Lisbon, Shay returned to Achilles, who tasked Cormac with traveling to the temple to retrieve the piece of Eden.

In 1755, Shay traveled to the temple in Lisbon and discovered the piece of Eden underneath the church, and the artifact disintegrated upon removing it from its pedestal. Removing the artifact caused a massive earthquake, and Shay was forced to escape as the city collapse and everyone there was killed. Shay returned to the homestead and confronted Achilles, blaming him for causing the deaths of innocents before being kicked out by Hope and Liam. Shay decided to steal the manuscript from the Assassins to prevent more destruction, but was confronted by his former allies when Achilles caught him. Shay managed to escape, but was shot in the back by Louis-Joseph and fell into the bay. Though believed to be dead by the Assassins, Shay survived as he was rescued by the Templar George Monro, who placed Cormac in the care of Barry and Cassidy Finnegan in New York.

Weeks later, Shay awoke and helped the Finnegans deal with criminals that broke into their home, and learned from one criminal that their leader was at his compound. Shay then infiltrated the compound and killed the gang leader, thus freeing the district from bandits and criminals. Afterward, Shay met George Monro, who explained the Templar's philosophy and tasked Cormac with saving Christopher Gist from execution. Shay succeeded in doing so, and decided to make Gist his first mate after clearing the port of gang members and assassin stalkers. Shay and Gist then met with Monro, who informed them that a French fort was messing with his operations, and Shay learned that it was Le Chasseur. Shay confronted Le Chasseur and killed him, but learned from the latter that the criminals were creating a poisonous gas in New York to fight against the authorities.

Returning to New York, Shay learned from Monro that a unnamed woman was heading the creation of the gas, which Cormac realized was Hope. Monro also told him that the woman was suppose to meet with Benjamin Franklin, and Shay met the inventor and received the prototype grenade launcher. Cormac then used the grenade launcher to destroy the factory, and was thanked by William Johnson and Jack Weeks for his actions. For months, Cormac showed himself to be a valuable asset for the Templars, and proved himself to be a possible recruit by Monro after helping evade Kesegowaase and his men. Shay would later kill Kesegowaase while his men were attacking a city, but soon learned from Kesegowaase that it was diversion so Liam could collect the manuscript. Shay found Monro's building on fire, and rescued the colonel, who gave him his Templar ring before passing away.

Following Monro's death, Shay was inducted into the Colonial Rite of the Templar Order by Grand Master Haytham Kenway, and Cormac informed Kenway of the precursor sites. Shay then worked to hunt down and eliminate his former allies, and first started with assassinating Adéwalé with the assistance of Haytham. Returning to New York, Shay worked with Weeks to break Hope's control over the city's criminals, and later learned from Kenway that Hope was hiding in an mansion. Shay traveled there and eventually killed Hope, and later worked with Captain James Cook on several occasions. When working with Cook for the last time, Shay managed to confront and kill Louis-Joseph, but learned that he was decoy for Achilles and Liam to make it to the precursor site in the artic.

Reporting the information to Haytham, Shay worked with the grand master with confronting both Achilles and Liam, with the latter causing the destruction of the artic after colliding with the precursor artifact. After dealing with Liam, Shay found Haytham battling Achilles, and convinced Kenway to let Achilles live so he could spread the message about the precursor sites. Haytham agreed, but crippled Achilles so he wouldn't follow them, or plan to kill them after he recovered from the artic. After stopping his mentor, Shay was tasked by Haytham with finding the precursor box, which Cormac noted would take years to find.

Shay was still searching for the precursor box and managed to get information being in the possession of Charles Dorian, who was an assassin of the French Brotherhood. In 1776, Shay was assisted by Benjamin Franklin in getting into the Palace of Versailles, but kept his true attentions a secret from his old ally. At the palace, Shay assassinated Dorian and collected the box, but Charles remarked that Haytham's son, Ratonhnhaké:ton had thwarted the Templar's plan for the New World. Though somewhat distraught that his years of work was undid, Shay decided that the Templars would kickstart the French Revolution to restore balance.

Shay's actions caused Charles' son, Arno Dorian, to be adopted into the de la Serre family and later become an assassin like his father. Cormac would continue to help the Templar Order, and later started a family of his own, training his children and grandchildren to become templars. His grandson, Cudgel would become a well known Templar, and Shay's lineage would go onto his descendant, Javier Mondragón. Shay's memories were collected by Abstergo, and Juhani Otso Berg used his memories to send a message to the Assassins. 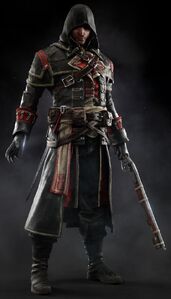