Member of the XYZ Resistance

Member of The Lancers

Shay Obsidian known as Shun Kurosaki in the Japanese version is a major character and protagonist in Yu-Gi-Oh! ARC V. A member of XYZ Resistance, Shay is the best friend of Yuto and the older brother of Lulu Obsidian, Shay also acts as a member of The Lancers.

He was voiced by Yamato Kinjo in the Japanese version, and by Matt Shipman in the English version.

Shay has black and dark teal hair with yellow eyes, before the attack on the XYZ dimension Shay wore a black shirt under a gray jacket, black pants with black and white shoes. After the attack Shay wears a tattered blue trench coat, black pants, brown shoes with black soles, and like all resistance members Shay wears a red scarf with his being around his neck Shay is also seen occasionally wearing a pair of dark goggles and has his scarf pulled over his face. In his Turbo duelist outfit Shay retains his red scarf but wears a teal, blue, and purple jumpsuit with black gloves and kneepads.

The earliest we see Shay is as a child with Lulu walking through Heartland. Shay is next seen in a flashback with Yuto watching Lulu duel with Yuto being shocked to find out that she's Shays sister and later he introduces her to him. In another flashback Shay is seen watching Lulu duel Saya Sasayama and after Lulu loses Saya attempts to give Lulu one of her cards only for Shay to angrily knock it out of her hand saying "A duelist should never give their cards to an opponent!" an act Shay later states he regrets. In another Flashback Shay is seen with Yuto and Lulu watching Kite Tenjo duel. After the attack on the XYZ dimension and Lulu's subsequent kidnapping Shay and Yuto have a brief encounter with Yugo mistaking him for an ally to the Fusion dimension. Shay and Yuto make their way into the Standard/Pendulum dimension where they begin attacking Leo institute of dueling staff and students. Shay is first seen attacking various Leo staff members as Yuto looks on with Shay turning them into cards after beating them. Later after Yuya Sakaki is chased by Leo staff and the father of Sylvio Sawatari who blames Yuya for injuring his son (in reality it was Yuto's doing) before Shay blocks off the Leo staff and duels them where he beats all 3 of them and turns them into cards as Sylvio's father runs away in fear. Later when Julia confronts Sora Perse and Zuzu Boyle about one of her professors who was turned into a card Shay attempts to confront her upon learning she is a student of Leo but is stopped by Yuto who knocks him unconscious after Shay confuses Zuzu for his sister Lulu.

Soon after Shay is approached by Declan Akaba who asks Shay to join the junior Arc-league championship which Shay accepts after Declan offers to help Shay get to Duel Academy. Shay partakes in the Championship in which he duels Sora and is able to make Sora admit to being a soldier from Duel Academy and the duel becomes heavily brutal as Shay unleashes his rage and ultimately defeats Sora. Later after Shay witnesses Yuya using Yuto's Dark Rebellion XYZ dragon, unaware of Yuto's encounter with Yugo and the awakening of Z-ARC within the 2 and Yuya accidentally absorbing Yuto after Yugo beat him, accusing Yuya of stealing it before Yuya defends himself. Shay later faces Sora once again but is defeated and saved by Yuya, and later Shay becomes a member of Declan's army known as The Lancers. After arriving in the Synchro dimension Shay joins an underground turbo duel ring where he begins searching for powerful duelists and ends up dueling Dennis McField, another Lancer whom Shay doesn't trust. However before the duel can end the under ground turbo duel ring is busted by Sector Security and is among those arrested. Shay later is released where he duels in the Friendship Cup, first dueling against Dennis who is revealed to be a Duel Academy spy and all throughout the duel Dennis taunts Shay causing Shay to once again unleash his rage and defeat Dennis' Chaos Ancient Gear giant. Shay then duels Crow Hogan and saves Tarren, one of the kids in Crow's care, when he falls off of the bridge, despite this Shay ultimately loses the duel and is sent underground where he later escapes with the rest of the Lancers after they get the message that Obelisk Force soldiers have entered the Synchro dimension. Shay later helps Declan confront Jean-Michel Roget who attempts to travel back to Duel Academy with Zuzu but the teleporter malfunctions and Roget vanishes but the teleporter reactivates sending Zuzu to the Fusion dimension while Yuya, Shay, Sylvio, and Gong Strong are warped to the XYZ dimension.

After arriving in the ruins of Heartland City Shay splits off from the other 3 and returns to his old school only to learn that most of the Resistance was wiped out while he and Yuto were gone but soon ends up finding Saya and Allen Kozuki, his fellow resistance members. Shay finds his way back to the others only to find Yuya dueling Kite who promptly ends the duel in a stalemate and leaves. Shay later confronts Kite after he defeats a group of Duel Academy soldiers and turns them into cards and Shay attempts to get Kite to return to the Resistance but instead ends up dueling Kite who accuses Shay of going soft when he doesn't duel like Kite remembers and Yuya brings up things of there past and how the kids looked up to Kite and Shay as heroes and Allen asks how Yuya would know and Yuya reveals that Yuto is part of him now as Shay looks at Yuya and says "I knew you were still around, I just knew it.". Despite all of this Shay loses and as Kite goes to turn him into a card, Kite instead backs off and leaves after Saya yells at him to leave him alone. Shay, along with Yuya duels against Grace and Gloria Tyler after Allen, Saya, Sylvio, and Gong are defeated. Despite the duel being challenging Yuya and Shay emerge victorious and while Gloria isn't immediately swayed by Yuya's way of dueling, Grace becomes a quick fan. Soon after Shay and Yuya take on a group of Obelisk Force soldiers, however when one of them summons Chaos Ancient Gear giant, Saya runs away in fear only for the seismic activity caused by the giant's footsteps to cause a building Saya was under to begin to slightly collapse as Shay quickly runs to shield her from the rubble, severely injuring himself in the process causing him to be unable to continue the duel.

Shay soon falls unconscious from his injuries as Yuya duels the Obelisk Force members, eventually gaining support from Kite who helps Yuya defeat the Obelisk force soldiers. Later after Kite attempts to rescue Lulu, Shay shows up with Aster Phoenix as Kite falls from the tower. After Shay saves Kite and Kite reveals that Lulu pushed him off the tower, Shay runs up to find his sister who tells him that Kite was acting strange, Kite begins trying to warn Shay that his sister isn't herself and that she's dangerous, but Shay initially believes his sister and begins to verbally threaten Kite before Lulu attacks Shay and the 2 become locked into a duel as Kite leaves to find the one responsible for brainwashing Lulu. Though Shay holds back at some points in the duel, Shay with help from his sister's conciseness defeats her. Shay then carries Lulu down the tower after which he collapses from a combination of the injuries that he hadn't fully recovered from, and lack of energy. Later, after Lulu falls under the Doktor's control again and duels Yuya who thinks that destroying the Fusion Parasite card will free her before a weak Shay appears telling them that he already tried that and it didn't fully work. Shay then tells Yuya that he's going to find Leo Akaba but before he can leave he is electrocuted by a brainwashed Celina and falls unconscious once again, waking up after the duel he meets up with Kite as the 2 notice the halls around them becoming distorted due to the dimensions beginning to remerge. Shay and Kite find their way outside where they challenge the newly reincarnated Z-ARC to a duel after Sora and Aster are defeated. However despite their best efforts Shay and Kite are both defeated by Z-ARC who is then challenged by Gong and Jack Atlas.

After Z-ARC's defeat Yuya sets out to vanquish Z-ARC's evil once and for all in which he finds his way to the ruins of Duel Academy. Yuya walks the destroyed corridors until he stumbles upon Alexis Rhodes who is trying to calm Shay down as he Questions Leo about the whereabouts of Yuto and Lulu before learning that they could have very well been erased after Z-ARC's defeat, Shay then challenges Yuya whom Shay begins blaming for Yuto and Lulu's destruction. However even with Shay's best efforts and all of his unleashed rage Shay loses the duel but before Yuya's attack lands he senses Yuto's spirit within Yuya which renews his hope that his friend and sister are still out there and later Lulu's spirit manifests within Zuzu when she is resurrected. 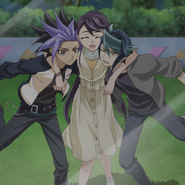 Shay with Yuto and Lulu in a picture