Shaymin's personality varies depending on the form. In both forms, it goes where there is gratitude, and will meet up with others of its kind, and migrate somewhere else.

In Land Forme, it is shy and easily scared.

In Sky Forme, it becomes playful and courageous. It also adopted dog-traits like shaking itself dry or by scratching itself with its hind legs.

Shaymin has the ability to absorb and purify any polluted air within its body, and releases it in a violent explosive burst. In Movie 11, the people in Floaroma town admits that the town was initially a barren wasteland, and celebrated Shaymin's ability to produce grass and a rare type of flower (Gracidea).

Hence its secondary form, it has the ability to fly. It reverts back to its base form either at night or when frozen.

Whenever there's any impending danger, it can escape peoples notice by camouflaging itself. It is capable of telepathy, and can sense the genuine gratitude of others.

Shaymin appears in Super Smash Bros. for 3DS as a trophy in it's both formes.

In Super Smash Bros. Ultimate Shaymin is a ace-ranked primary grab-type spirit on it's land forme. It's spirit battle is against Ivysaur on Yoshi's island where the player takes minor damange. At level 99, it's spirit can be enhanced to it's sky forme, which increases the user's jump. 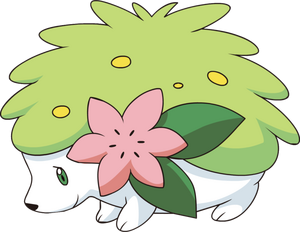 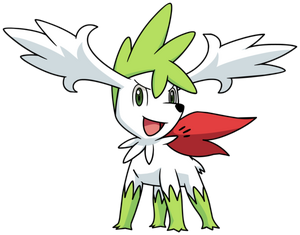