Shazam originally known as Captain Marvel is a superhero from the DC Universe.

Billy Batson was orphaned at a young age. After being kicked out of foster care, he was forced onto the streets. But he tried his best to stay strong and not conform to the corrupt world around him. Because of this, the wizard Shazam took notice of him. He chose to give Billy Batson his power. Billy used the power of Shazam to protect the world against threats like Black Adam and to protect his sister.

Captain Marvel has a wide variety of abilities, similar to the powers of the gods. 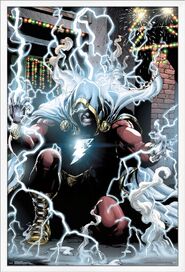 Shazam (originally Captain Marvel) in Injustice: Gods Among Us

Add a photo to this gallery
Retrieved from "https://hero.fandom.com/wiki/Shazam_(DC)?oldid=1010538"
Community content is available under CC-BY-SA unless otherwise noted.