Superhero
Member of the Shazam Family

Teenage Superhero
Pedro Peña is one of the three tetartagonists (along with Eugene Choi and Darla Dudley) of the 2019 film Shazam!, the seventh installment in the DC Extended Universe. He is a shy and silent member of Billy's foster family.

He was portrayed by Jovan Armand as Pedro Peña and D. J. Cotrona as Shazam Strong.

Life with his foster family

Pedro grew up in a foster home raised by Victor and Rosa Vasquez, with his foster siblings Mary Bromfield, Freddy Freeman, Eugene Choi and, Darla Dudley, although he was not related to any of them, he loved his foster family. One day during Christmas time, Victor and Rosa brought a teen runaway named Billy Batson to family be part of the family. When Pedro first meets Billy he remains silent when he greets him. Pedro was next seen during the family dinner where Victor did his grace but Billy did join in the grace.

The next day at his school Fawcett Central, after Billy's first day at the school ends, Freddy is nearly run over Brett & Bruke Breyer in their truck. After the brothers try to make Freddy pay for the scratch to paint of their truck, even thought it wasn't his fault, and Freddy refuses, Pedro watches in horror as the Breyers beat him up, even he and his other siblings, except Billy, try to stand for Freddy. After Billy picks a fight with the Breyer brothers when they mock Freddy for not having a mother, and briefly beats them up before they gain the upper-hand and chase Billy into the subway, Pedro, Mary, Eugene, and Darla, help Freddy up. Later that after Billy disappeared after his fight with the Breyers brothers and everyone begins searching him, Pedro goes into in the bathroom to throw out a test he didn't do well and finds Billy's notebook of women he thinks is his real mother, that he through into the trash can the previous night, in the trash can and takes it.

He is next seen during a family during when everyone discussing a man dressed like a superhero, who appearing in Philadelphia, is asked about he what thinks of him, then Pedro says thinks the costume is stupid, and he witnesses an argument between Billy and Freddy.

The next day when Billy comes home injured, Pedro overhears Victor lecturing Billy, Pedro and the rest of his siblings see the news report on the superhero with Freddy talking to him. Mary then explains about the argument between Billy and Freddy the previous night and about how she was saved by the superhero earlier in the day and he knew so much about her, that Billy is the superhero, although Darla already knew as she told by Billy and Freddy. Then they all go upstairs to talk to Billy after Victor is done scolding him Pedro holding his notebook. They tell Billy about his real parents, his father is prison in Florida and his mother lives only two subways stops away and she has been using her maiden name which is why he didn't find her. After Billy heads out to see his mother with Victor and Rosa following while Pedro and the rest of his siblings stay behind in case Billy returns.

However, when Freddy comes home with Dr. Thaddeus Sivana, a man who was offered the Wizard's powers as a child but was rejected for being tempted by the demons known as the Seven Deadly Sins, now empowered by the Sins and wanting to gain Billy's powers, right behind and he and his siblings are taken hostage Sivana. When Billy returns to the house agrees to give Sivana his powers to project Pedro and the rest of his siblings. Pedro and the rest of his siblings then follow Sivana and Billy to the Rock of Eternity to help Billy.

After evading Sivana and returning to Philadelphia with Sivana following them, they end up at a Christmas Village carnival and Sivana threatens all the people there. While Billy tries to fight Sivana, Pedro and his siblings try help by getting Sivana to release all the sins, after discovering he needs them in his body to keep his powers, but Pedro and his siblings, except Mary at first, are captured by the Sins. After Sivana and capture Pedro, Mary, Eugene, Freddy, and Darla, Sivana tries to make Billy gave up his powers threatening to kill Darla. When it appears Billy is going to gave Sivana his powers, he remembers how the Wizard told to him find others to share his powers with, he gets hold of the Wizard's staff and tells his siblings to grab, and say the wizard's name. After Pedro and his siblings say Shazam's name, they are transforms into superhero versions of themselves, and Pedro discovers he has superhuman strength after the Wrath tries to attack him and he manages to push him away.

Pedro and his siblings then work together to fight Sivana and the Sins and save the people at the carnival. Pedro then works together with Darla to save the people on a Ferris wheel that was damaged by Sivana, while Darla uses her speed to save the people on the ride, Pedro uses his super strength to hold up the Ferris wheel. But Pedro then attacked by Wrath again and the Ferris wheel falls over, but Freddy manages to save the last two people on the ride, the Breyer Brothers, before it falls to the ground. After Billy tricks the final sin, Envy, into leaving Sivana's body, and removes the Eye of Sin from Sivana, the sins are imprisoned again, Pedro, Billy and the rest of their siblings are hailed as her heroes by the people at carnival. After they return the Eye of Sin to Rock of Eternity, which they make their new lair, Pedro and his siblings enjoy Christmas dinner, and do the grace which this time Billy joins in, have learned that his mother intentionally abandoned him, and finally accepts them as his family.

Some time later during lunch period at school, Pedro and his siblings sit with Freddy to have lunch with him, despite having separate lunch periods, then Billy shows up in cafeteria as in his superhero form, telling everyone that he and Freddy are best friends and Freddy taught everything he knows about being a superhero, then he reveals invited Superman to have with lunch them as well.

Pedro as Shazam Strong and the Shazam Family 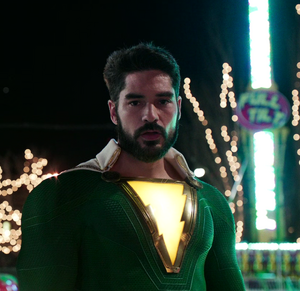 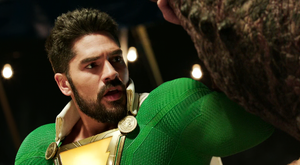 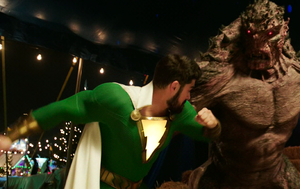 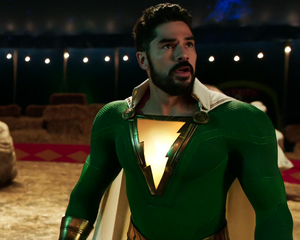 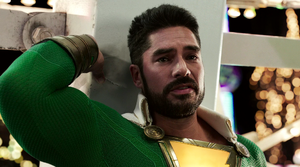 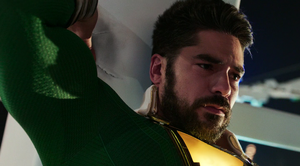 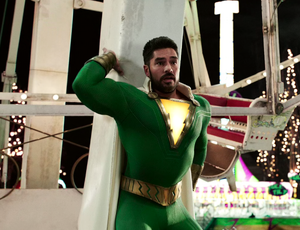 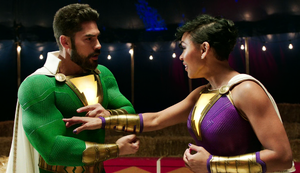 Retrieved from "https://hero.fandom.com/wiki/Shazam_Strong_(DC_Extended_Universe)?oldid=2107900"
Community content is available under CC-BY-SA unless otherwise noted.