She-Hulk (real name Jennifer Sue Walters) is a fictional character and recurring superheroine found in various Marvel comics and media, and is a major character in the Hulk comics.

She is a skilled lawyer and cousin of Bruce Banner, who became the She-Hulk after giving her his blood to save her. After her transformation, Jennifer later became a superhero, and became a member of the Avengers, the Fantastic Four and the A-Force. She will have an upcoming titular TV series on Disney+ in the Marvel Cinematic Universe as part of the Phase Four slate.

She was created by the late Stan Lee and the late John Buscema, and first appeared in Savage She-Hulk #1 in February of 1980.

Jennifer Walters was originally a lawyer who was injured in a shooting resulting from gang turf violence. When her doctors determined she was in need of a blood transfusion to survive they contacted her cousin Bruce Banner to be a donor. Bruce Banner had trepidations about donating as he was hiding his identity as the Hulk and feared what his blood might do to Jennifer but with no other living relatives, Bruce was literally the only person with compatible blood to save Jennifer without complications.

With Jennifer's life at stake, Bruce decided to risk it, hoping that his condition was not transferable. Once the transfer was complete there seemed to be no initial complications and Jennifer was brought out of critical condition.

When Jennifer lost her temper though, she became a great green Hulk just like her cousin and blacked out during her initial transformation, only remembering bits and pieces of her time as the She-Hulk. When the situation confirmed Bruce's fears he revealed to her who he was and what had happened to leave her to deal with being the She-Hulk.

Bruce had hoped his gamma fueled mutation was not transferable on a genetic level and theorized Jennifer would only experience a lesser version of his Hulk transformation if anything and was deeply remorseful to see that he was wrong and Jennifer would go through the exact same transformations as he had. Despite the apparent drama and seriousness of the situation, Jennifer, in short order, found that after she had a chance to adjust to the initial trauma of the change she could actually remain in control of her mental faculties while in her Hulk state, unlike Bruce at the time.

Over time Jennifer became more and more accustomed to the transformation and even learned how to trigger it. Soon Jennifer was intentionally assuming and staying in her hulk form just for convenience's sake and using her power to fight crime and prevent anyone else from becoming a casualty of crime as she nearly was.

Jennifer Sue Walters was born in Los Angeles, California to Sheriff Morris Walters and Elaine Banner, and was raised in LA. Growing up, she had little confidence but would visit her cousin Bruce Banner in the summers during their childhood. She would help him escape from his father's abuse, spending hours in a public library and sometimes spent the night there.

One day, Jennifer was wounded by agents of crime boss Nicholas Trask, as she had been defending a gangster to turn in evidence of Trask's crimes. Bruce was in town when this happened, and broke into a doctor's office to treat her wounds. Realizing that she was going to die, Bruce gave her a transfusion of his own blood since there no other supplies at the moment.

Afterward, Bruce took her to a local hospital but had to transform into the Hulk and flee when he was a suspect in Jennifer's attack. Trask's thugs attempted another hit on Jennifer, causing Bruce's blood to activate the gamma radiation, turning her green and increasing her size and strength. The thugs were surprised, calling her "She-Hulk", and she trapped the thugs for the police to find them. After defeating the thugs and the emergency over, Jennifer reverted back to normal.

Though Jennifer was at first savage when she transformed into the She-Hulk, she eventually gained her intelligence when she transformed. Jennifer began to appreciate the confidence and assertiveness that came, and started to feel more comfortable in her She-Hulk form than her human one. Jennifer was later framed by Trask when killed a trucker whom he paid off to keep quiet about a shipment coming in from Stark Industries, and attempted to kill her again. It was revealed that the Stark technology were robotic parts to build a She-Hulk Robot, Jennifer was able to destroy it.

Trask later abducted Jennifer's father, giving him more advanced weapons from Stark Industries to kill the She-Hulk. The sheriff was ignorant that he was sent to kill his own daughter, and Trask also rigged the weapons so they would explode and kill them both. Jennifer spotted the flaw and saved herself and her father, and she later investigated Trask who had constructed a earth-boring device called the "Silver Serpent". She-Hulk fought Trask, and he was buried alive with the drill, as it continued to bore deep and deep into the Earth.

She-Hulk continued her career as a hero, and met the Hellcat during her solo career before joining the Avengers. During her time with the team, she was transported to Battleworld by the Beyonder and participated in the first Secret Wars. The event was notable for sparking her long standing rivalry with Titania, a woman genetically enhanced by Doctor Doom with Battleworld technology. She temporarily replaced the Thing in the Fantastic Four after the events of Battleworld, and was granted detached membership status with the Avengers.

During her time with the Fantastic Four, she had to prevent a radiation leak in a downed S.H.I.E.L.D. Helicarrier. The radiation exposure apparently mutated Jennifer to the point where she could not transform into her normal form, but she was fine with this, as she preferred to be her She-Hulk form. Shortly after her exposure, she appeared before the Supreme Court, and battled Titania once again. After the Fantastic Four, She-Hulk rejoined the Avengers after the Masters of Evil attacked the Avengers' mansion.

Upon returning to the team, She-Hulk and the others were influenced by Doctor Druid and Nebula, to appoint him chairman of the team. After Druid and Nebula were lost in space time, the Avengers were disbanded for a time until Captain America restarted the group. After rejoining, She-Hulk joined the staff of attorney Blake Tower, and met Louise "Weezi" Mason, the former superheroine known as the "Blonde Phantom". She-Hulk also went on some adventures with the Heroes for Hire while doing legal work for them, and briefly dated Luke Cage.

She has superhuman strength, speed, and can break the fourth wall, much like Deadpool. She also seems to be quite athletic. Like the Hulk, She-Hulk gets stronger the angrier she gets with no upwards limit seen for her strength capacity, however since she remains in control of her mind during her Hulk state she reaches such levels far less easily than the classical, instinct governed, Incredible Hulk. Her other powers of superhuman speed, regeneration healing factor, super leaps, reflexes, and invulnerability can potentially reach limitless levels.

Jenny originally faced major rage issues brought on by her transformation and was predisposed toward violence but soon was able to get a grip of her self to the point where her temper was completely in her control. As a result of her exercise over her temper triggered powers, Jenny has become very light-hearted, though she often hides behind a sarcastic demeanor as well.

Jenny tried for years to help Bruce get control of his temper too but, with his powers far more temperamental than hers, she wasn't able to do much more than help him delay his fits of rage.

Jenny maintains a deep sense of responsibility to help those around her but does not view that as being a reason to impede her day-to-day activities and spends many parts of the day she is not at work or on patrol at the beach or getting spa treatments entirely as her She-Hulk alter-ego, to the point where she rarely feels any need to revert to her original human form. 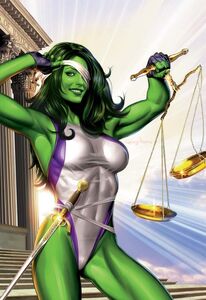 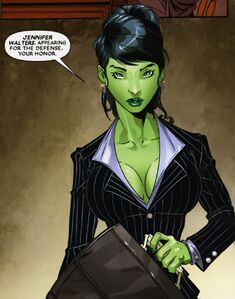 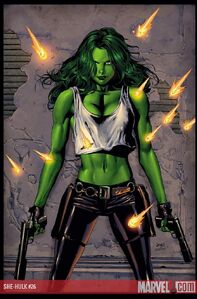 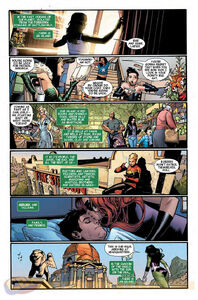 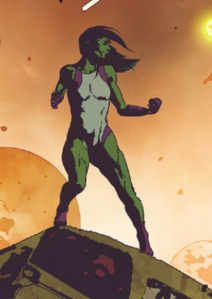 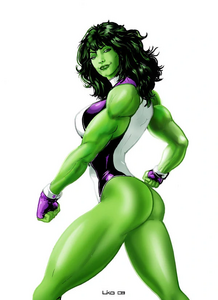 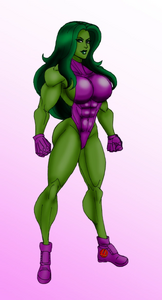 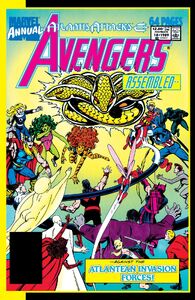 She-Hulk in Marvel vs. Capcom 3: Fate of Two Worlds.

She-Hulk in Ultimate Marvel vs. Capcom 3. 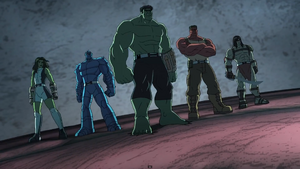 She-Hulk with the others in Hulk and the Agents of S.M.A.S.H. 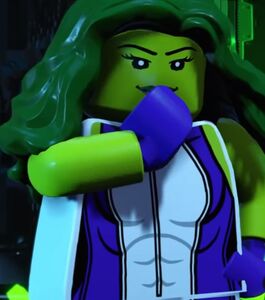