Defend Etheria from the tyrannical rule of Hordak and the Evil Horde.
Defeat Horde Prime and save the Universe

She-Ra/Princess Adora is the main protagonist from Dreamworks She-Ra and the Princesses of Power.

She is voiced by Aimee Carrero who also played Angie from Level Up and Princess Elena from Elena of Avalor.

16-year-old orphan Adora of Planet Etheria, who turns into the Princess of Power, She-Ra, after finding a magic sword. She is guided by a group of magical princesses as she wages battle to liberate Etheria against the evil Horde and their leader Hordak.

She has dirty blonde hair, blue eyes, and narrow brown eyebrows. She wears a long-sleeved white turtleneck with pointed sleeves, and red accents (one of which being The Horde symbol on her back, removed after she defects to The Rebellion). Usually worn over her shirt is a red jacket with quarter length sleeves, and a popped beige collar (until she defects, she wears the Force Captain badge). She also wears gray pants and a brown belt with a Horde buckle, which is later replaced with a golden wing, a symbol of her new found Rebellion allegiance.

She-Ra has long, wavy platinum blonde hair and light blue eyes. She also has a thin golden crown with two wings on each side, and a red jewel in the center, and solid, golden arm cuffs. She wears a white dress with golden, six pointed flower embroidered on the chest, divided by a golden seam that splits the bodice from collar to belt. At the center of the flower sits an oval azure gemstone. Her sleeves are golden, pointed pauldrons that stand of their own accord. The aforementioned seam blends into the gold trim of her uniform collar and ends when it reaches the apex of her thick golden belt, creating a V-shaped belt at her waist. Her white ruffled skirt, which begins under the belt, is open at the front revealing a pair of white, skin-tight shorts striped with a thick golden line on the outside of each thigh. She-Ra also wears knee-high athletic white and aqua boots, with gold soles and accents. She completes her ensemble with a knee-length red cape. She is also about 8 feet tall, taller than many of the other characters. 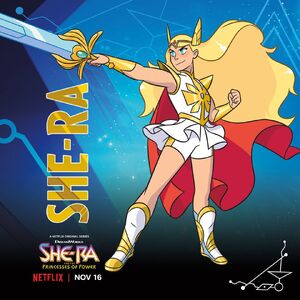 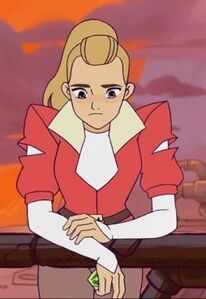 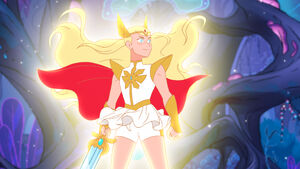 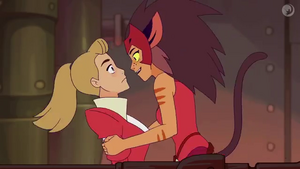 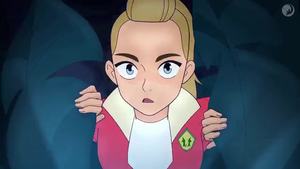 Adora has been chosen. 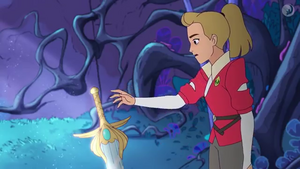 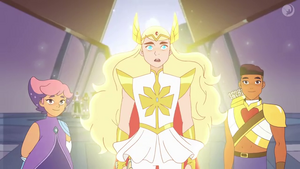 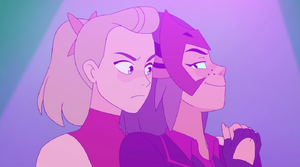 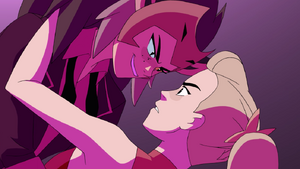 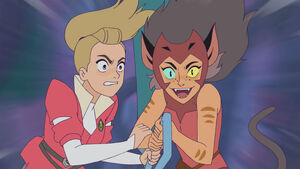 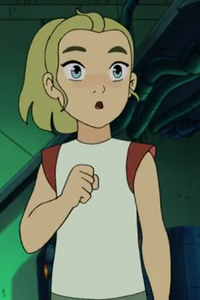 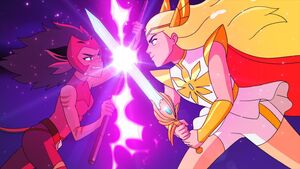 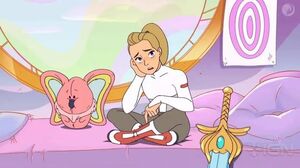 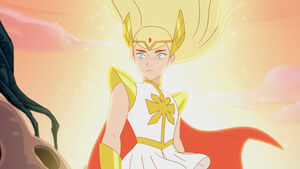 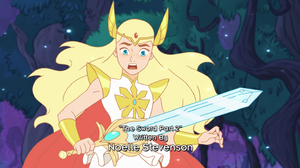 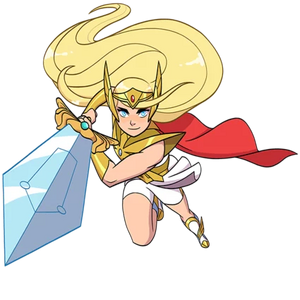 Retrieved from "https://hero.fandom.com/wiki/She-Ra_(Dreamworks-Verse)?oldid=1644723"
Community content is available under CC-BY-SA unless otherwise noted.