Being with Eddie (formerly).

Help Eddie end his vendetta against Spider-Man (succeeded).
Get rid of the symbiote and make it stop corrupting Eddie (failed).

She-Venom (real name Anne Weying) is a fictional character from Marvel Comics, she is the ex-husband of Eddie Brock, who is better known as the anti-hero/villain Venom. She also appeared in the 2018 movie Venom and its sequel Venom: Let There Be Carnage, portrayed by Michelle Williams, who also played Glinda the Good Witch of the South in Oz: The Great and Powerful.

She was created by David Michelinie and Mark Bagley, and first appeared in Amazing Spider-Man #375 in March of 1993.

She is Anne Weying, the ex-girlfriend of Eddie Brock, and a lawyer that believes in fighting for justice (just like Matt Murdock). Despite being broken up, she mantains a more or less friendly relationship with Eddie, acting her moral support.

When Eddie decides to expose Carlton Drake's horrifying, and world-threatening, experiments, Anne uses her skills as a lawyer to help Eddie.

During a crucial moment in the fight against Riot, Eddie shares the Venom Symbiote with Anne. Thus, She-Venom is born: a woman with the same powers as Venom (superhuman strength, superhuman speed, invulnerability, telepathy, wall-crawling and symbiotic webbing), but with none of the intense hunger of Venom and less tendency towards sociopathy.

Anne Weying attended Empire State University as a law student, where she met Eddie Brock, falling in love with him after he falsely saved her from thugs. The two eventually married, with Anne becoming a successful lawyer, as Eddie became a journalist for The Daily Bugle. During their marriage, Anne became disgusted with Eddie's obsession with Spider-Man, having a vengeful fixation against the superhero after the Sin-Eater incident. With his inability to accept the responsibilities of his actions, Anne divorced Eddie, causing him to become depressed.

When Eddie bonded with the symbiote host Venom, Spider-Man approached Anne for info, and she told him of Eddie's backstory. When Spider-Man chased Venom at an amusement park, Anne followed and succeeded in making Eddie stop his vendetta. Later on, Anne's law firm was hired to represent Fordham Rhodes, the former head of Extreme Violence. Rhodes' company created the Spider-Man & Venom: Maximum Carnage that facilitated one of Carnage's killing sprees. When the Sin-Eater attacked, Anne was wounded as Rhodes was killed, only surviving by using her briefcase.

Anne was hospitalized and given surgery, but Sin-Eater tracked her down, attempting to finish her off. Venom intervened and took her to his lair, an old bomb shelter where Eddie was, who told her that the symbiote could heal her. She refused, as she didn't want to turn into a monster like Eddie, but the symbiote bonded with the both of them. However, Venom had to separate from Eddie to bond with Anne, as her vital signs declined during their transformation.

Anne transformed into She-Venom, stopping thugs from killing Eddie who had entered the old bomb shelter. She gave into the symbiote bloodlusts, slaughtering the criminals despite Eddie's protest, but she came back to her senses after Venom returned to Eddie. Anne stated she wanted nothing to do with Eddie, and returned to her apartment where she was taken hostage by Kirsten's mother, who's child was crippled in an altercation by Venom. The symbiote reluctantly bonded with Anne again when Eddie was incapacitated, and fought Kirsten's mother, and the Sin-Eater. Kirsten came and stopped Sin-Eater, who activated a bomb vest, as Anne defeated Kirsten's mother while the symbiote returned to Eddie.

Afterward, Anne realized that she was mysteriously pregnant, eventually giving birth to a son named Dylan. Traumatized, Anne decided to send Dylan to his grandfather, Carl, and promised to return when she recovered. However, Anne was taken into custody and forced to help the police capture Venom. Though she didn't want to, the police stated that they could imprison her for aiding a felon. Anne bonded with the symbiote again, but Eddie called Venom back as they could bond via their minds. Anne was taken to the shooting range to be incarcerated when they learn that the symbiote was going through the phone lines.

Anne attempted to stop a fight between Venom and the second Spider-Man, Ben Reilly, but was nearly shot by police. Anne was arrested by the police for aiding her ex-husband, but Eddie sent the symbiote to help her escape. The symbiote told her that Eddie wanted to meet her at the amusement park, but She-Venom attacked a gangster named LD-50 before Spider-Man intervened. When Eddie arrived and was set ablaze, She-Venom returned the symbiote to him to save his life, but Anne was taken hostage by LD-50. Anne was saved by the police, and told Eddie that she didn't want him in her life, as the symbiote had corrupted him, and was attempting to corrupt her as well.

Months passed, and Anne developed a fear that the symbiote would want to return to bond again. Eddie Brock returned to Anne to rekindle their relationship, but his memories of hating Spider-Man had been lost. Anne told Eddie that she hadn't been outside in months, but saw Spider-Man swinging outside her window, wearing the black suit as his red and blue suit had been stolen. Anne feared that the symbiote wanted to bond with her again, causing Eddie to become angered and transform into Venom. In fear and pushed to the edge, Anne leaped off a high rise of the apartment, leading to her death. 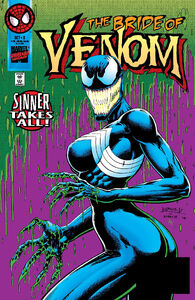 Michelle Williams as Anne in Venom. 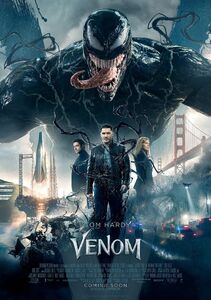