To defeat the Empire

Seryu and Koro
The Empire

Sheele is a supporting protagonist in the manga/anime series Akame Ga Kill!. She was one of the members of the assassin's group, Night Raid. She seemed to be a clumsy and ditzy woman on the surface, but was actually a very caring and sweet woman, being known as the kindest person in the group.

Sheele was a slender woman with long light violet hair, and dark violet eyes. She usually wore a revealing sleeveless lilac cheongsam with detached lilac arm sleeves and white boots. She usually had her Teigu with her. She wore glasses and had a scar on her right cheek. During her earlier appearances, she wore a hat.

Sheele was an airheaded woman, often losing her glasses or failing at any chores she tried to do due to clumsiness, however she was very kind and caring to her friends, willing to sacrifice her life for them, as seen with Mine. However, her attitude changed completely when she killed, becoming cold and impassive; she described it as having "a screw loose" in her mind, which made her a talented killer. She believed that getting rid of the "society's trash" was the only thing she could do well, and therefore couldn't be considered useless.

She was shown to frequently apologize to those she kills, often as a force of habit.

Because they partnered together often in missions, she and Mine became close friends through life and death battles. Sheele sacrificed herself to protect Mine, fighting even after being bitten in half in order to buy Mine time to escape. However, because of Sheele, Mine was able to gain an insight in her second fight with Seryu. 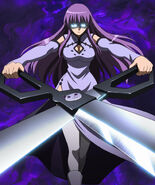 Retrieved from "https://hero.fandom.com/wiki/Sheele?oldid=2179069"
Community content is available under CC-BY-SA unless otherwise noted.