Help her friends in every adventures.

Her mother and father

She is voiced by Francesca Marie Smith along with Helga G. Pataki.

Sheena is "one of the geeks" ("Eugene's Bike", "Rhonda's Glasses"), although what she does to deserve this title is never really mentioned, except that she shows off her "scab in the shape of Texas" in "Eugene's Bike". Still, when the fourth grade girls get together, nobody minds that Sheena's there, although with Helga and Phoebe being best friends, as well as Rhonda and Nadine, Sheena is the one left on her own. Not that much has been revealed about her, except that she has an aversion to violence (mentioned in "School Play") and she can play the cello ("School Dance"). 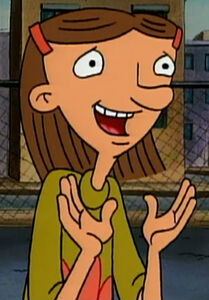