Sheena and Kareena H'ahrmonee  are supporting characters from the 2016 animated film, Barbie Starlight Adventure. King Constantine was looking for young volunteers with special skills, and his council chose the twins to be help with a mission. Sheena and Kareena travel to Oppa-Irri and attend the Great Gala in the king's Grand Ballroom. At the gala, the twins meet their teammates: Prince Leo of Kumai, a pilot; and Barbie of Para-Den and Sal-Lee of Upper Plope, both hoverboarders.

During the gala dinner, Sheena and Kareena choose to eat food from a perwinkle tube because perwinkle is their favorite. Later, the twins dance to a remix of the boring ball music, but are stopped by King Constantine due to their dancing being against his rules.

The following day, Artemis and King Constantine explain the mission to the team: The galaxy has fallen out of step with the universe. According to the prophecy, if they didn't get the stars to dance again, the stars would stop and disappear. Leo would pilot through the dangerous route to the central planet, Sal-Lee and Barbie would fly Sheena and Kareena through the orb fields, and then the twins would clear the way to reach the heart of the galaxy. Once the king gained access to the heart of the galaxy, he would use his Stat-o-Tron machine to create a high-voltage energy grid, which will shock the stars back to order.

Sheena, Kareena, Barbie and Sal-Lee practice their part of the mission with a hoverboard race course designed by the king. The track features super gravity and anti-gravity zones, astroid mazes and gravity-defying orb fields. Because of the twins' powers, Barbie tells Sal-Lee that they should work together instead of racing in order to make the course easier. While navigating the course, Sheena falls, but Barbie and Sal-Lee throw Kareena. Kareena catches Sheena, and Sal-Lee wins the race with Barbie's help.

The next day, King Constantine sends Sheena and Kareena on one final test with Barbie, Sal-Lee and Leo. They travel to a planet in the more desolate reaches of the galaxy to search for a Starlian starlian. They find the last known location of the starlian and Sheena and Kareena suggest using Leo as bait. The team creates a song to lure the starlian into a trap. Barbie frees the starlian, thinking that the king wants to keep it in his zoo where it wouldn't be able to survive.

King Constantine dismisses Barbie from the mission for freeing the starlian because they needed it to protect them from magnetic storms on their way to the centre of the galaxy. Sheena and Kareena try to persuade the king to change his mind, but he dismisses them for the evening. Barbie asks the starlian to join them on their mission, and it accepts, so King Constantine reinstates Barbie in the team.

Barbie and Sal-Lee tell Sheena, Kareena and Leo that Barbie is back on the team. Sheena and Kareena ask if anyone else is terrified about their mission, and Leo and Sal-Lee agree. Leo finds a guitar and so Barbie shares her favorite song, "Shooting Star", to help calm everyone down. Sheena and Kareena sing with their teammates and the next day, they travel to the central planet with King Consantine, Artemis and the starlian.

On the central planet, Sheena and Kareena use their powers to take everyone down closer to the centre of the planet. They find the heart of the galaxy, and after the Stat-o-Tron fails, Barbie dances and uses her powers to reset the stars. The magnetic storms clear and Sheena, Kareena and everyone else return to the castle, where the king throws the volunteers a party to celebrate. 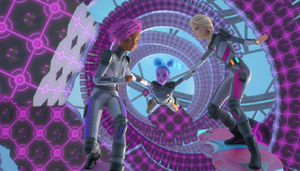 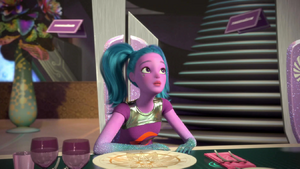 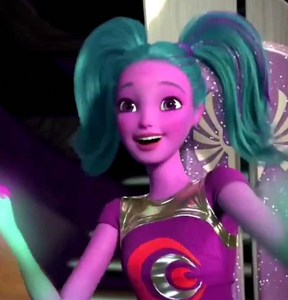 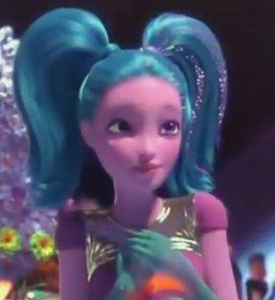 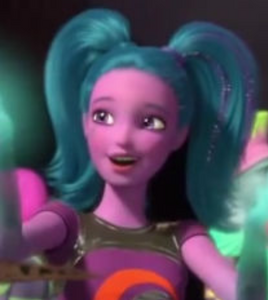 Kareena's doll
Add a photo to this gallery 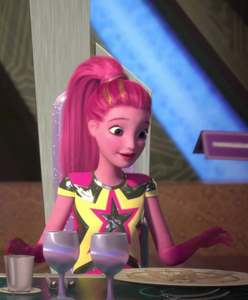 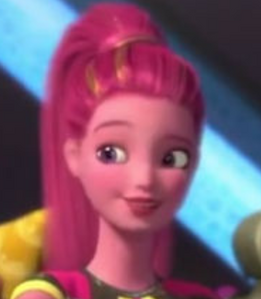 Retrieved from "https://hero.fandom.com/wiki/Sheena_and_Kareena_H%27ahrmonee?oldid=1765600"
Community content is available under CC-BY-SA unless otherwise noted.