Laputa: Castle in the Sky

Protect her amulet from the government.

Sheeta, or alternatively, Lusheeta Toel Ul Laputa (her full family name), is one of the main protagonists in the 1986 animated Studio Ghibli film, Castle in the Sky. She is a young girl who carries a volucite stone (levistone in some subtitled version, levitation stone in the original English dub and aetherium in the Disney dub). She is an orphan, just like her companion, Pazu.

She is voiced by Keiko Yokozawa in the Japanese version, and by Anna Paquin and Debi Derryberry as a child in the Disney dub and Lara Cody in the Streamline dub.

Originally, she came from Gondoa, deep in the northern mountains, and raised cattle alone, until the day Colonel Muska's men came and took her away. She was Muska's prisoner until Dola, a pirate captain, arrived and tried to steal her crystal. Sheeta fell out of an airship and came across Pazu, who rescued her. Pazu helps her escapes from Dola and her crew and they discover the secret of Laputa's power. Sheeta tells Pazu she is a descendant of the people of Laputa right before the two of them are captured by Muska and the army.

When Sheeta learns that the secret of Laputa and Muska discreetly threatens Pazu's life to guarantee her co-operation, she tries to convinces Pazu to forget about Laputa for his own good. Remembering a spell from long ago, Sheeta recites it and the sacred light brings a huge robot back to life. It scares off the soldiers and hands her over to Pazu, who saves her again. Dola welcomes Sheeta and Pazu to her crew instead of holding them hostage and gives them work.

After a battle in the clouds, the heroic twosome finally discover Laputa and, discovering the palace under attack and Dola and the boys held prisoner, realized they must rescue the city from Muska's evil plan. Sheeta notices Muska preparing to open a door leading to the royal chambers but is kidnapped. Pazu frees Dola and the boys and rushes to save Sheeta. Meanwhile, Muska seizes power over Laputa, but Sheeta breaks free and pulls the crystal out of his grasp.

However, the evil man attempts to force her to obey him, but Sheeta stands her ground and refuses, telling him that the kingdom died out because its leader was cruel and the world cannot live without love. Pazu steps up and that faces Muska, who threatens to kill Sheeta if the two of them don't comply. Pazu convinces him that he'll do it if he lets him talk to Sheeta. Muska reluctantly agrees and gives them a minute. Sheeta and Pazu recite the spell of destruction, destroying the castle and causing Muska to fall to his death.

The battle won, our heroes realize that the huge tree living in the middle of the kingdom has saved them with its roots. Then they sail off into the sky, with Dola and her crew alongside them. 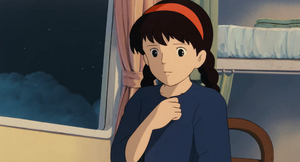 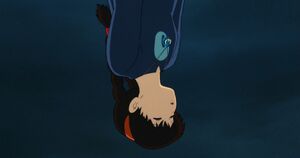 Sheeta falling from the airship, but having her fall broken by her crystal. 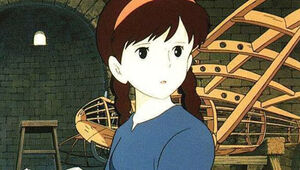 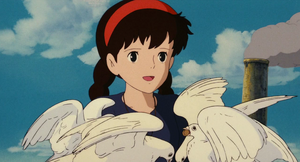 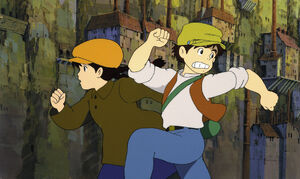 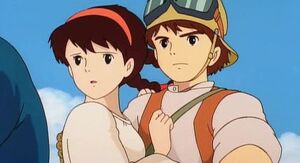 Sheeta and Pazu watching the sky. 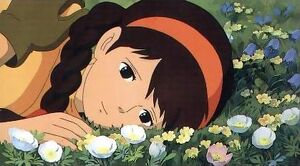 Sheeta and the flower. 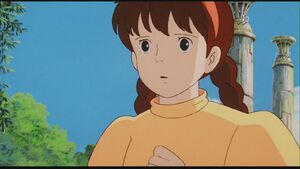 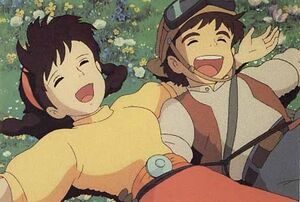 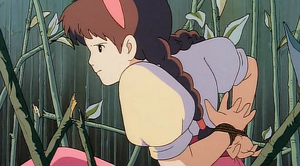 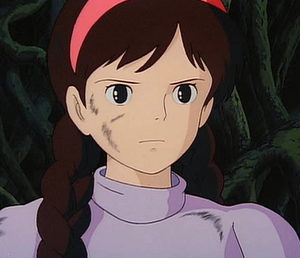 Sheeta defiantly standing up to Muska. 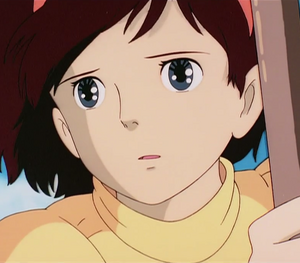 Sheeta with short hair at the end of the movie.