Help Link on his adventures.

She appears as the deuteragonist in The Legend of Zelda: Ocarina of Time and a minor character in The Legend of Zelda: Majora's Mask. The Sheik ego herself has also reappeared prominently in both the Super Smash Bros. series and Hyrule Warriors series albeit under different incarnations of Princess Zelda with the exception of Super Smash Bros. Melee.

Sheik originally served as a disguise Princess Zelda used to escape Ganondorf's capture where she passed herself off as a male Sheikah known as Sheik. Throughout the course of Ocarina of Time, Sheik aids Link, who is initially not privy to Sheik's true identity, by providing him with information and teaching him teleportation songs with a lyre, allowing Link to easily warp to an area corresponding to the song.

Sheik is a mysterious Sheikah warrior that claims to be the last of her kind. She teaches Link the various songs to teleport him to the various temples around Hyrule. Likewise, Sheik turns out to be Zelda's alter ego.

Sheik can only use one weapon: the Goddess Harp. She also packs lots of Kunai as well. The Goddess Harp allows Sheik to play the various Ocarina of Time songs to utilize various elemental attacks, yet the weapon deals damage of the Lightning element only, which is also the Goddess Harp's element. 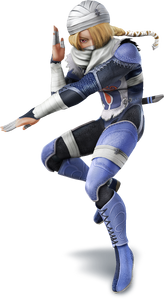 Sheik in Super Smash Bros. for Nintendo 3DS/Wii U 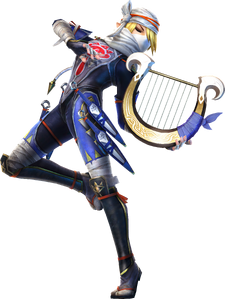 The symbol on Sheik's chest 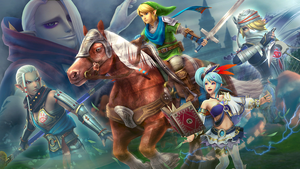 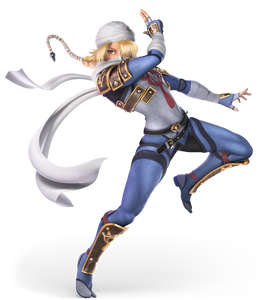 Sheik as she appears in Super Smash Bros. Ultimate.